Fox turns up heat in bid for Sky 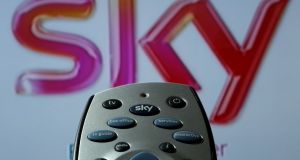 Fox is bidding to take full control of Sky

Rupert Murdoch’s 21st Century Fox has turned up the heat in the battle to take over Sky after trumping rival Comcast with a higher bid worth $24.5 billion (€21 billion).

Fox hiked its bid to take full control of Sky to $14-a-share — nearly a third more than the $10.75 price it agreed to pay in its original offer 18 months ago and leapfrogging US cable group Comcast’s $12.50-a-share takeover proposal.

Sky’s independent committee has agreed to Fox’s raised bid, with all eyes now on Comcast’s next move amid expectations it may improve its $22 billion offer.

Fox is hoping to see off competition from Comcast after a long battle to buy the remaining 61 per cent stake in Sky it does not already own, having faced heavy scrutiny from the UK government and competition watchdogs.

But analysts were not convinced, with its $14-a-share counter-bid lower than some had expected.

George Salmon, equity analyst at Hargreaves Lansdown, said: “The fact the offer is slightly behind what some had anticipated brings another twist.

“In fact, there’s every chance it might entice another counter from Comcast.”

Fox is still waiting for a final decision from the Government on whether to accept its proposals over the sale of Sky News to address concerns over media plurality, given that the Murdoch family also owns News Corp — the publisher of a raft newspapers including the Sun and the Times.

Last month, the then UK culture secretary Matt Hancock said Fox would have to sell off Sky News to secure government approval for the deal.

Under its plans to offload Sky News to Disney, Fox has pledged to provide a Disney-owned Sky News channel with funding of at least $100 million a year for 15 years.

But if terms of a sale of Sky News cannot be agreed, Mr Hancock told Parliament the “only effective remedy now would be to block the merger altogether”.

A decision is expected by July 12th.

The Government has separately cleared Comcast’s bid for Sky.

Shares in Sky slipped back around 1 per cent after Fox revealed its latest offer, but the stock remained above the $14 price — at around $14.89 — in a sign that investors are expecting another move from Comcast.

Sky has been thrust at the centre of a global tussle between media giants Walt Disney and Comcast as they lead a fightback against the might of Amazon and Netflix.

Fox has already agreed to sell most of its assets — including its current 39 per cent stake in Sky — to Disney.

If Fox buys the remaining stake in Sky before completing the Disney deal, Disney would take full ownership of Sky when it closes its own takeover of the Fox assets.

But in a further complication to the takeover saga, Comcast has also made an all-cash offer for the Fox assets separate from its offer for Sky.

Comcast is preparing to post details of its $12.50-a-share Sky offer documents before a Friday deadline under UK takeover rules.

On its higher bid, Fox said: “As the founding shareholder of Sky, we have remained deeply committed to bringing these two organisations together to create a world-class business positioned to deliver the very best entertainment experiences well into the future.

“We strongly believe that a combined 21st Century Fox and Sky will be a powerful driver for the continued growth and vibrancy of the UK and broader global creative industries.”