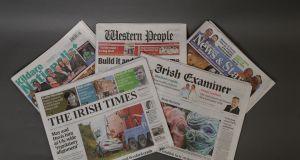 The Irish Times has completed the acquisition of all of the publishing and media interests of the Cork-based Landmark Media group, which owns the Irish Examiner newspaper and other titles. Photograph: Dara Mac Dónaill

The Irish Times has completed the acquisition of all of the publishing and media interests of the Cork-based Landmark Media group, which owns the Irish Examiner newspaper and other titles.

In a statement to employees on Tuesday, The Irish Times said it “looks forward to working closely with all staff in the combined companies in building a successful media group”.

The company said its objective was to create a “dynamic and vibrant business” that could “sustain itself for the longer term and where the respective media assets – national, regional and radio – will contribute significantly to the Irish media market”.

It said the combined scale provided “opportunities for consolidation, to secure existing revenues and will provide a platform to build and grow new digital readers and revenues”.

The “core identity and independence” of the respective news titles will be retained under the deal.

“The overall increase in audience allows the group to build a digital platform with a strong reach, countrywide and internationally,” The Irish Times told staff. “The consolidation also presents the opportunity to strengthen and grow existing print advertising revenues and helps to secure contract print revenues.”

The Irish Times is “fully committed” to working with the respective union groups in each company on restructuring in the combined group”.

In a statement, Séamus Dooley, Irish Secretary of the National Union of Journalists, said; “ We welcome the commitment of the new owners to honour existing agreements and to work in a collaborative way with the trade unions.

“In a challenging time for the media industry, the acquisition by The Irish Times is a welcome development. Our priority is the preservation of terms and conditions of employment.

“It is encouraging that the Irish Times is strongly committed to the maintenance of the editorial independence of the titles. The ’Examiner’, in particular, occupies a proud place in the history of the Irish media and will continue to do so under the new owners.”

In addition it has interests in three local radio stations – 75 per cent in both WLR and Beat, and 17.6 per cent in Red FM in Cork. Its online publishing activities include breakingnews.ie, irishexaminer.com, recruitireland.com and benchwarmers.ie.

The share-purchase agreement between The Irish Times and Landmark was signed on December 5th. The deal was later approved by the Competition and Consumer Protection Commission, Minister for Communications Denis Naughton, and the Broadcasting Authority of Ireland.

The deal marks the end of the Crosbie family’s ownership of the Irish Examiner, which dates from 1872, when journalist Thomas Crosbie took over the proprietorship from John Francis Maguire.