Feast of football fails to be matched in sponsorship deals 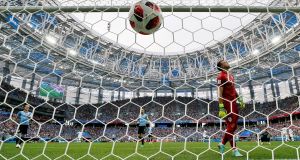 Fernando Muslera (R) of Uruguay is beaten as France go 2-0 up during the FIFA World Cup 2018 quarter final: negative sentiment Qatar 2020 and the manner in which it won the vote will weigh on sponsors

The World Cup is a feast of football and is also usually a feast of sponsorship with international brands eager to cash in on the global attention and excitement the tournament generates.

Not this year. A long-simmering corruption scandal that exploded in 2015 with a series of dawn raids on Fifa exposed a culture of kickbacks, bribes and criminality. The subsequent charges of several Fifa officials by US prosecutors caused many western brands to rethink their sponsorship of world football’s governing body and of its marquee event.

The addition in 2015 by Fifa of a new sponsorship tier for international brands ended in failure when only a handful of companies signed up. Fifa also lost several big sponsors, including Sony and Emirates, when their deals ended at the end of the Brazil World Cup in 2014. They have been replaced by Qatar Airways, Russian energy company Gazprom and Dalian Wanda, the Chinese property and cinema group, but the net effect for Fifa has been three fewer sponsors at the Russia World Cup than it had in Brazil.

This has had a corresponding impact on Fifa’s income, with sponsorship revenues for the organisation’s 2015-18 tournament cycle £179m lower than in the previous 2011-14 cycle.

The omens for the next four years are similarly bleak unless Fifa takes drastic action, according to Tim Crow, a sports marketing adviser who has worked for a number of Fifa sponsors. “It’s a holding pattern at the moment and there isn’t much Fifa can do to grow revenues,” he said.

Qatar will host the 2022 World Cup and negative sentiment around that tournament and the manner in which it won the vote, when bribes are alleged to have changed hands, will weigh on sponsors, he adds. “The bottom line is Fifa’s image...it’s seen as a body that will do anything for money and which is not about being for the good of the game.”

This is not to say Fifa does not have opportunities to innovate. The introduction of video assistant referees in Russia has been a surprise hit with viewers and provides Fifa with a potentially new and lucrative stream of advertising revenue.

World Cup matches have been paused for video assistant referee replays, when the team of assistant referees study controversial incidents. Now that VAR has been proven to be a success these moments could easily attract a title sponsor at future tournaments, said Mr Crow - much as they would in US sports, such as American football.

“Fifa put VAR out to pitch [WITH SPONSORS] before the World Cup and no one wanted it,” he said. “But now that it’s been proven to work expect to see a sponsor go for it. It’s time in the game that you can’t ignore.” – Copyright The Financial Times Limited 2018