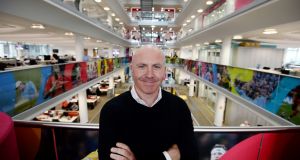 Former RTÉ and Eir executive Glen Killane has been named deputy director of sport at the European Broadcasting Union (EBU).

He joined the State broadcaster in 1996 and become the organisation’s youngest ever head of sport when he was appointed in 2004. He joined Eir in 2016 and departed in April this year in the wake of the company’s takeover by French telecoms billionaire Xavier Niel.

He said he was “very proud” to be joining the EBU. “The World Cup in Russia is the most recent example of how public service media and sport are intertwined, delivering huge audiences free-to-air and a shared viewer experience that unites the nation. The EBU plays a critical role in sustaining this so I am really excited to be part of its future,” he said.

Mr Killane will report to director of sport Stefan Kürten and will lead the EBU’s new sport strategy which focuses on growing the organisation’s rights portfolio.

“Glen has a strong track record of pushing the boundaries and his experience will help drive our position on the market further,” Mr Kürten said.

“His wealth of experience in delivering innovative and positive change and building relationships with stakeholders across Europe, make him the ideal person to help build on our excellent reputation and drive us into the future, with our new strategy and new way of working.”

The changes with the EBU are part of a strategic “reshaping” of its sport department which also include the appointment of a new head of content.