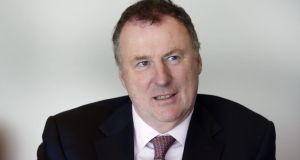 Irish Continental Group chief executive Eamonn Rothwell would have been due €1.8 million under an executive incentive scheme that has been scrapped. Photograph: Brenda Fitzsimons

The Sunday Times reports that the Irish Ferries owner, Irish Continental Group, has scrapped an executive incentive scheme after “institutional shareholders mounted a bruising protest vote against pay levels”. ICG has deferred any awards under a 2009 share bonus scheme pending a shareholders’ vote. Chief executive Eamonn Rothwell would have been due €1.8 million under the plan.

Aidan Heavey, who will this week step down as chief executive of Tullow Oil, has sold almost €5 million worth of its stock to invest in its shares at a lower price under a rights issue, the Sunday Times also reports. Tullow last month announced a surprise rights issue at £1.30 a share.

The former motor tax office close to the Four Courts in Dublin, considered “one of the ugliest buildings in the capital”, looks set to be demolished to be replaced by a 249-bed hotel, the Times says. A Pakistani-Irish businessman, Jalaluddin Kajani, who came to Ireland in the 1980s, has lodged a scheme to redevelop the site, which he bought for a reported €8 million.

Minister for Jobs Mary Mitchell O’Connor twice intervened with Central Bank governor Philip Lane to tell him the bank was being blamed for “blocking Brexit jobs”, according to documents that form that basis of a story in the Sunday Business Post. She also pressed the governor on whether mortgage-lending rules could be relaxed.

Anne Graham, the chief executive of the National Transport Authority, tells the Post that Dublin is facing congestion chaos unless the State spends hundreds of millions upgrading the capital’s transport infrastructure. She says the NTA has asked for a cash injection on top of the allocation for transport in the existing capital plan.

Nightclub owner Michael Wright, whose Wright Venue in Swords is one of the biggest night spots in the State, is investing €3 million to turn St Andrew’s church on Suffolk Street in Dublin city centre into a food market. The Post reports that he will launch a planning bid within eight weeks and aims to be open by June next year.

RTÉ will launch a “significantly upgraded” version of its on-demand service, RTÉ Player, later this year, according to the Sunday Independent. The paper reports that the State broadcaster has invested about €1 million in the revamped service, which is being developed with international partners as RTÉ fine tunes a strategy to compete with services such as Netflix.

Proxy advisory firm Glass Lewis has advised insulation group Kingspan to appoint an independent chairman. It is currently chaired by group founder Eugene Murtagh, whose son, Gene Murtagh, is the chief executive. Glass Lewis made its recommendation ahead of the annual general meeting this week. Rival proxy firm Institutional Shareholder Services has already advised shareholders to vote against an executive share bonus programme.