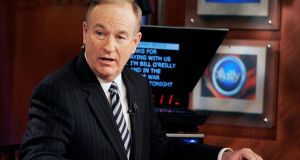 Bill O’Reilly, the Fox News star who was fired this week amid a sexual harassment scandal, will a receive a $25 million (€23.3 million) payout, equivalent to one year’s salary, as part of his exit deal with 21st Century Fox, according to a person with knowledge of his contract.

The payout follows the presenter’s dismissal from Fox News this week after a 22-year career with the network and compares with the $40 million collected by Roger Ailes, the network’s former chairman, when he parted ways in similar circumstances last year.

It comes just months after Mr O’Reilly had agreed a new four-year contract worth $25 million a year. “The amended contract provides for Bill to receive a maximum of one year’s salary,” said a person with knowledge of the terms.

21st Century Fox, the Murdoch family that controls it and representatives for Mr O’Reilly declined to comment.

Mr O’Reilly will be replaced by Tucker Carlson in his coveted 8pm slot but there is no guarantee the new host will be as successful as his highly profitable predecessor.

“People who hated Bill O’Reilly still tuned in to watch,” said Chris Ruddy, chief executive of Newsmax, a conservative-leaning media group. “The secret of Roger Ailes’ success is that he got O’Reilly who has unparalleled talent and was unpredictable and independent but leaned conservative.”

It is unclear what Mr O’Reilly will do next – or if he will contest the terms of his exit.

In a statement on Wednesday that made no reference to Rupert Murdoch or his sons James and Lachlan, Mr O’Reilly said it was “tremendously disheartening that we part ways due to completely unfounded claims”.

He was fired following an independent investigation by the law firm Paul Weiss into claims that he harassed several women. More than 50 advertisers had pulled out of his show after New York Times reported that he and Fox News had paid a combined $13m to silence women who had complained of sexual harassment and inappropriate behaviour over more than a decade.