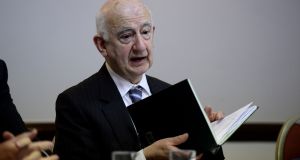 The Irish Press group, which once published the now-defunct newspaper and currently owns the residential database Thom’s Directory, is to be wound up following a meeting of shareholders in Dublin today to appoint a liquidator.

The meeting, which was called by directors including Eamon De Valera, the grandson of the group’s founder, approved the appointment of Dundalk accountant Tony McBride as liquidator.

Mr McBride will now take control of the PLC’s remaining asset, the subsidiary that publishes Thom’s. The Irish Press disposed of a property in Dublin last year and also wound down a public relations division in recent years and also sold its stake in Tipp FM radio station.

Its last filed accounts, for 2014, show it had accumulated losses of more than €5.3 million. Shareholders at the meeting in the Tara hotel on Friday were presented with an extract from unaudited management accounts that suggested it currently has a deficit of shareholders funds of €661,259.

A shareholder, Dublin accountant Neal Duggan, expressed dissatisfaction that proper statements were not produced detailing the name of the controlling party of Irish Press.

He also told The Irish Times that he is considering asking an appropriate statuory bodywhether or not there exists grounds for an examination of the the affairs of the company.

Mr De Valera expressed regret that the company is to be wound up and suggested it was inevitable, given its financial position.

The liquidator, Mr McBride, had not yet responded to a request for comment prior to publication.

The publishing group was founded in 1931 by the former president of Ireland, Eamon De Valera, to publish a newspaper with strong links to Fianna Fáil, which was also founded by Mr De Valera.