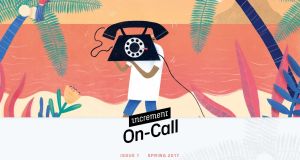 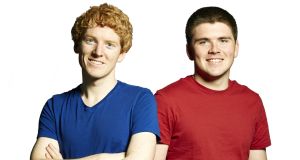 Stripe, the online payments firm run by the billionaire brothers from Limerick, has launched a new software engineering magazine.

Increment, a new online publication aimed at coders, is being lauded by tech insiders in Silicon Valley as “the New Yorker for geeks”.

Stripe chief executive and co-founder Patrick Collison said the publication “aims to illuminate the most sophisticated practices from the best companies in the world”.

Brothers Patrick (28) and John Collison (26), co-founders of payment service Stripe, earlier this year made the Forbes billionaires list for the first time, joining the ranking of the world’s richest as the youngest newcomer billionaires.

The Irish duo each has an estimated fortune of $1.1 billion thanks to their firm raising money at a $9.2 billion valuation last year.

Patrick Collison has also spoken of the success of another spin-off, Stripe Atlas, a platform to help start internet businesses, which they launched a year ago.

He said it was “something of an experiment to begin with, but the response has been hugely encouraging”.

Since then, Stripe Atlas has helped thousands of entrepreneurs from 124 countries to start their companies, including a cosmetics start-up in the Gaza Strip.

The online magazine is being led by Susan Fowler, an engineer who became famous in Silicon Valley for her blog that chronicled her allegations of sexism and sexual harassment at Uber.

Ms Fowler, who has been working with Stripe since she left Uber, described Increment as a “collection of insider tips cultivated from inside Silicon Valley’s largest and most influential companies and entrepreneurs”.

The quarterly publication will detail long-form technical writing “that unearths how the most secretive and highest-performing engineering teams build and operate software systems at scale”.

“The decision to join Stripe and run Increment was a pretty easy one for me,” said Ms Fowler.

“It was an opportunity to be impactful, to collect and share best practices from the most effective engineering teams in the world. Increment is a step toward flattening the distance between the Silicon Valley elite and developers everywhere.”

Stripe, which was founded in 2009, offers payment processing services for online and mobile transactions.

The San Francisco-headquartered company, which employs more than 500 people globally, now operates in 25 countries, including Japan, where it recently officially opened for business.

It has users in 110 countries and counts firms such as Macy’s, Bloomingdale’s, GE, Adidas, DocuSign, Slack, Nasdaq and the NFL among its customers.