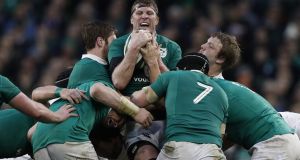 TV3 will take “a Super Bowl Sunday approach” to the Six Nations next year, capitalising on its rights to the rugby tournament by launching and promoting new shows on its schedule.

Director of programming Bill Malone told advertisers and agencies that TV3 Group will take advantage of the influx of viewers by scheduling a “drama of scale” on its main channel next spring. This will then be plugged during the rugby ad breaks.

The broadcaster, with support from owner Virgin Media, plans to make a six-part “contemporary Irish” drama with a budget of at least €3 million. It has secured an international distributor and has also applied to the Broadcasting Authority of Ireland for funding.

Mr Malone was in Cannes at the MIPTV industry event earlier this month to talk to distributors and producers.

TV3 has the Irish television rights to the Six Nations for four years from 2018. The landmark deal, which saw it snatch the rights away from RTÉ, was announced in November 2015, months after cable giant Liberty Global acquired TV3 through UPC Ireland (now Virgin Media Ireland).

Although sports rights are typically loss leaders, rugby has been kind to TV3 in the past. The 19-year-old channel recorded its highest audience during the 2015 Rugby World Cup, with an average of 1.15 million people tuning in for Ireland’s game against France.

Mr Malone said the group, which also includes the channels 3e and Be3, was planning its schedules further in advance. TV3’s deal with ITV, which includes the rights to soap operas Coronation Street and Emmerdale, means it has a long-term supply of programmes that it will use “to leverage our own content”.

Under Mr Malone, TV3 has embarked upon a commissioning drive in recent months, the results of which will be on air from the autumn.

Irish economy to grow by 3.4% this year, predicts EY 00:09
Belfast Harbour seeks to develop six new film and television studios 00:01
Your business week: all the results, indicators and meetings 18:00
Should AIB compensate me for upsetting letter on arrears? 16:00
Chris Johns: The Johnson administration will spend, and needs a quiet Treasury 15:01
Search executive
jobs on irishtimes.com