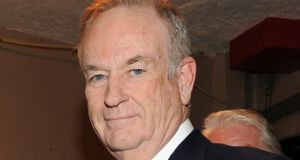 Bill O’Reilly. The decision to oust the broadcaster from Fox News was taken jointly by Rupert Murdoch and his two sons, James and Lachlan. Photograph: AP Photo/Jeff Christensen

The forcing out of Bill O’Reilly, the dominant personality of Fox News, says much about the most successful US cable news network and the attitude of members of the Murdoch family towards him. It is also a significant moment for other television personalities and the degree to which off-screen misbehaviour is tolerated.

O’Reilly was doomed by a New York Times story earlier this month detailing how he and Fox News had made payouts totalling $13 million (€21.1 million) to address complaints against him from women about sexual harassment and other inappropriate behaviour.

He denied the accusations, but the shield that Fox News had given him under Roger Ailes, its former chief executive, did not last under its new management.

The accusations against both Mr Ailes and O’Reilly of harassing women gave the impression that Fox had turned a blind eye to misbehaviour by valuable figures. “It is tremendously disheartening that we part ways due to completely unfounded claims. But that is the unfortunate reality many of us in the public eye must live with today,” O’Reilly complained on Wednesday.

The decision to oust O’Reilly was taken jointly by Rupert Murdoch and his two sons, James and Lachlan, who control the parent company 21st Century Fox. It followed a boycott of O’Reilly’s very popular nightly show by more than 50 advertisers, with the possibility of lasting financial damage.

It is striking, however, how long Fox had allowed what became a scandal to continue. This gave the impression of it having had a Mad Men-like tolerance for its creative figures behaving badly off-camera, providing that they contributed to revenues by attracting viewers.

Fox News is a special case, but the phenomenon of male celebrities having leeway to exploit fame sexually is not. The horrifying case of Jimmy Savile, a BBC personality who was found after his death to have abused many women and children, showed how controls can fail.

O’Reilly was a television star whose blue-collar, no-nonsense style chimed with many Fox viewers. But he was brought down by changes in the media itself – not only the persistence of the New York Times in investigating him, but the difficulty of limiting the flow of information in the internet age.

His fall came after Wendy Walsh, a former guest on his show, complained to a Fox News hotline about his behaviour and Lisa Bloom, her lawyer, posted a video clip of her doing so. There is no possibility of keeping embarrassing accusations under wraps when the power to broadcast is distributed.

Donald Trump was elected as US president partly by convincing his supporters that the “mainstream media” did not give them a fair shake, and some of O’Reilly’s backers will resent the New York Times’s role in his downfall. Ultimately, though, a powerful media organisation could no longer protect him.

O’Reilly dubbed his show the “no-spin zone”, an oasis of straight talking about current events. The “unfortunate reality” he faced this week is that anyone can now report back. – (Copyright The Financial Times Limited 2017)

1 How can I view my dead brother’s will if I’m not the executor?
2 Investors pile into property as turnover in build-to-rent sector reaches €2.54bn
3 Kerry’s Chinese sales set for 30% hit from coronavirus
4 Provisional liquidator appointed to Dublin engineering firm
5 Bank of Ireland staff in line for 2.95% pay increase
6 Analyst doubles projection for Tesla shares to $1,200
7 Apple’s coronavirus sales warning hits global markets
8 Flutter’s planned merger with Stars gets informal approval in Australia
9 Bursting of Tesla bubble a case of ‘not if, but when’
10 Number in employment rose 3.5% in final quarter
Real news has value SUBSCRIBE