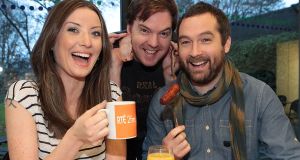 The Joint National Listenership Research survey for the period July 2016 to the end of June 2017 suggests that a 2fm recovery is under way, with the station making gains for the third consecutive quarter.

“We had a plan and we have stuck to the plan. Everybody here has held their nerve,” said 2fm head Dan Healy. “Breakfast, in particular, is very satisfying.”

Breakfast Republic, presented by Jennifer Zamparelli, Bernard O’Shea and Keith Walsh, now reaches an audience of 178,000, up 11,000 since the last survey, or “book”.

The station now has a national market share of 6.4 per cent, a figure that has nudged upwards over the past year, although as recently as 2015 its share was above 7 per cent.

“We’re keeping it calm here, because you can get strong books and weak books and they come at you very quickly,” Mr Healy said.

The rise in its audience “helps with revenue and helps with internal morale”, he added.

Today FM’s woes resumed, with the Communicorp-owned station losing market share. It now has a 7.4 per cent share of the national market, down from 7.7 per cent in the last survey.

The station launched a major advertising campaign in May and will be hoping to see positive results from it in future surveys.

After a winning streak, RTÉ Radio 1 fell back slightly in this survey, although its market share of 23 per cent, down from 23.8 per cent, means it is still comfortably the biggest single station.

Its weekday peak-time shows all lost listeners compared to the last quarterly survey, but Seán O’Rourke, Ryan Tubridy, Ray D’Arcy and Mary Wilson’s Drivetime all have more listeners than they did a year ago.

Joe Duffy’s Liveline, the second most popular radio programme, saw its listenership drop 13,000 since the last survey to 381,000. Its audience is down 10,000 year on year.

Morning Ireland remains the most listened-to programme with 436,000 listeners, but this is down 13,000 year on year. The show will adopt a “pacier” style as part of a revamp of the format from September, said head of Radio 1 Tom McGuire.

Mr McGuire could not confirm that Six One presenter Bryan Dobson will join the programme to replace Cathal Mac Coille when the latter retires next month. The decision rests with RTÉ’s news and current affairs division.

“If it turns out to be Bryan, great,” Mr McGuire said.

Radio 1’s weekend sports programmes are performing well year on year thanks to its live coverage of all GAA games, to which the station has the exclusive rights under a new five-year deal.

“That audience is really important to us,” the Radio 1 boss said.

On Newstalk, Pat Kenny broke through the 150,000 mark for the first time with a listenership of 151,000. Mr Kenny’s audience, the biggest on the station, has been boosted last September by an extension of his show’s duration by half an hour and a new starting time of 9am. However, he remains substantially behind Today with Seán O’Rourke on Radio 1, which now has 342,000 listeners.

Newstalk’s national peak-time market share stands at 6 per cent, up from 5.8 per cent in the last survey.

“This puts us in a strong position as we approach the first anniversary of the new schedule,” said Newstalk managing editor Patricia Monahan.

The JNLR is a rolling survey in which almost 17,000 people are interviewed about their radio habits by research firm Ipsos MBRI on behalf of the industry over the course of a 12-month period.

If a radio station changes its schedule, the answers in one survey can relate to both the current presenters and their predecessors. This means a show has to be on air for a full year before its “true” listenership can be calculated.

Some 82 per cent of adults in Ireland tune into the radio on a typical day, listening for an average of more than four hours.

The Choose Radio industry group, which represents all radio sales houses to advertisers, said the research confirmed the status of the medium as the main form of audio listening, despite competition from newer sources.

Radio is “the original social media”, the group said.