Media must close its own gender pay gap before lecturing others 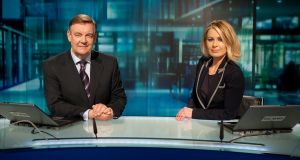 Six-One: Bryan Dobson and Sharon Ní Bheoláin present the RTÉ news bulletin, but, in a pattern that repeats itself across the Irish media, Dobson is paid significantly more

In the immediate reaction to the BBC’s depressing and brand-damaging gender pay gap, a message from the Woman’s Hour presenter Jane Garvey to her employer leaped out: “If the BBC thinks we’re not talking to each other, we are.”

It would be foolish indeed for any employer to underestimate the extent to which women compare notes with other women. Promotional opportunities (or lack of), respect (or lack of), childcare-unfriendly hours, sexual harassment, those tiny little gendered remarks that keep you awake at night, general misogyny and rates of pay are conversational staples in any workplace with more than one woman.

This is why so many of us who don’t work for the BBC were cheering when Garvey, having talked about the gender pay gap on her Radio 4 programme for a decade, co-ordinated an “act now” letter to the BBC’s director-general, Tony Hall, signed by 45 of its highest-profile women employees.

Now RTÉ journalists are speaking out, and the National Union of Journalists has struck while the pay-gap iron is hot, saying it has serious concerns about disparities between RTÉ employment contracts, “with particular reference to gender”, and calling for an independent review.

RTÉ has confirmed that it will review gender equality – a welcome development that shows how pay disclosures at the top of an organisation have the potential to benefit women at every level.

Don’t let anyone tell you that a gender pay gap at the top is not worthy of attention, or that these presenters and journalists are so well paid, possibly overpaid, that the anomalies are not worthy of examination. Women from the BBC’s Emily Maitlis to RTÉ’s Sharon Ní Bheoláin do other women a huge favour when they use their voices to highlight these issues. I’m sure they would much rather not feel the need to do so.

So angry and depressed this is happening at #bbc feels like we've been duped - words about equality not enough #bbcwomen https://t.co/kTeOYRrH78

In the media there is so much that seems arbitrary about who gets the biggest pay packets and who doesn’t, but the broader pattern couldn’t be clearer.

Of the nine highest-paid BBC stars only one is a woman, whilein the most recent RTÉ figures available – published in 2016 and relating to 2014 – just two of the top 10 earners were women. This similar outcome is not a coincidence. RTÉ and BBC, both funded by the public, decided the men were worth more.

The men, so long as they were white, just happened to have that magic something, that sure-fire charisma, that special integrity, that striding confidence, that je ne sais quoi that meant they commanded – no, deserved – a bigger wedge. A much bigger wedge.

The scary thing about the BBC disclosures for many female observers is precisely that these women are so successful in their field. For many of this relative elite, childcare issues are either not a factor or far from being a material one. If even these experienced, talented and dedicated high achievers can’t overcome gender discrimination, and are left feeling angry and “duped”, what hope is there for the rest of us?

In my experience women are often reluctant to admit that it is gender prejudice that has held them back. They really don’t see that as some handy fallback excuse for failing to progress – quite the opposite. The idea that they have faced workplace discrimination because of their sex makes their situation seem worse. They would much rather be undone by bad luck or their own unduly magnified flaws than by centuries of stubbornly ingrained cultural bias.

We are not all that far past the point in history when married women were forced to retire and it was the explicit policy of employers to pay single women less than men, so they wouldn’t get any ideas about dodging the fulfilment of their real purpose “within the home”, as the Constitution so ominously phrases it.

Pay-disclosure obligations may have been forced on public service broadcasters by politicians with wider agendas, but that shouldn’t negate their usefulness. It is completely possible to want RTÉ and the BBC to thrive and still argue that pay at the top is too high and that the extent of the disparities, not just on gender, is scandalous.

In Britain, the story of the BBC’s abysmal record on the gender pay gap is a rehearsal for next April, by when every company with 250 or more staff will have to publish on their websites how much they pay men and how much they pay women, both by the hour and in the form of bonuses.

Here, it will be a wasted opportunity if RTÉ is the only media company and the only State body (other than third-level institutions) to conduct a thorough gender equality review. Without hard information nothing will ever change.

You certainly don’t have to be a presenter of Woman’s Hour to cringe at the hypocrisies of a male-dominated media organisation lecturing other sectors – politics, education, science, technology, the law – about their shortcomings on equality when the very same problems are often much worse closer to home.

1 Why gift a son now if it eats into his tax-free inheritance threshold?
2 Flights abroad ban could last all summer
3 Government to avoid ‘cliff-edge’ on Covid-19 payment changes
4 Chris Johns: Economic self-harm is the root of populism
5 How much do Irish people earn? And what will Covid-19 do to our wages?
6 Half of investors believe market underestimating crisis, survey shows
7 Ten of the most mysterious aircraft disappearances
8 Restaurants file court actions against insurers over lockdown losses
9 Why are markets booming when a crash is on the way?
10 Ireland faces 'deep downturn' this year and may not rebound until 2024 if there is a second wave
Real news has value SUBSCRIBE