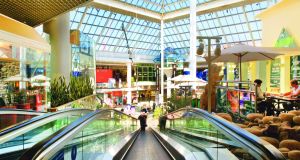 The Square shopping centre in Tallaght.

Nama has appointed agents Cushman & Wakefiled and Jones Lang LaSalle to sell the Square shopping centre in Tallaght, according to the Sunday Times, bringing to market one of the last remaining large-scale, stand alone commercial properties in the agency’s portfolio.

The agents are expecting to start marketing the complex in September and the centre is likely to be valued at well over €300 million.

The Times also reports that AIB is to charge corporate customers for keeping their money on deposit, imposing negative interest rates for the first time. The move comes after the ECB confirmed last week that it would continue its loose monetary policy for the foreseeable future.

Both the Times and the Sunday Independent have INM-related stories with the Times reporting that Robert Pitt, INM chief executive, has ruled out a paywall for the group’s websites despite last week’s profit warning. The Independent reports that legal cost relating to and inquiry by the Office of the Director of Corporate Enforcement and an independent corporate governance review at INM may have already exceeded €1 million.

The Independent also tells us toll road operator turned renewable energy firm NTR is looking to raise €500 million to build its portfolio with the capital raised being used for a new green energy fund.

Aer Lingus, according to the Independent, has been damaged by Ryanair’s more customer-friendly strategy, according to an internal Aer Lingus document. The airline is also feeling the pinch from new low-cost carrier Norwegian Air on US routes.

The Business Post reports that the State has begun the process of collecting €15 billion in taxes and interest from Apple following last year’s ruling that the company benefited from a sweetheart deal with the Revenue Commissioners. The Department of Finance and Apple are to hire escrow agents, custodians and investment managers to handle the the money over a number of years.

According to the Sunday Telegraph war has broken out between two of Britain’s green energy suppliers Good Energy and Ecotricity with the possibility that Ecotricity will launch a hostile takeover of its rival.