Sky adds just 35,000 new customers in Britain and Ireland in its fourth quarter 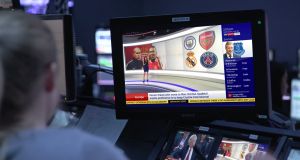 Sky reports a fall in full-year profits after it was stung by increase in cost of live Premier League football. Photograph: PA

Tight cost control and strong growth in Germany, Austria and Italy helped European pay-TV group Sky to absorb a sharp rise in the cost of soccer rights, supporting earnings as it waits to be bought by Rupert Murdoch.

Sky, which also broadcasts in its core markets of Britain and Ireland, reported full-year adjusted operating profit in line with forecasts, down 6 per cent due to the higher cost of English Premier League rights and investment in the business.

The solid financial performance made up for some weak operational numbers, with Sky adding just 35,000 new customers in Britain and Ireland in its fourth quarter, down from the 93,000 customers it added in the same period a year ago.

He said the group had benefited from restructuring its cost base, spending more on onscreen content such as Game of Thrones and Big Little Lies

Churn, or the percentage of customers dropping the service in the year, was 12.6 per cent in Germany and Austria, and 11.5 per cent in Britain and Ireland, both higher than normal, while the average amount spent by customers was flat in most markets.

Chief executive Jeremy Darroch said 2016/17 had marked a year of investment for the company, during which it managed to grow full-year revenue by 10 percent despite some tough market conditions. He said the group had benefited from restructuring its cost base, spending more on onscreen content such as Game of Thrones and Big Little Lies, and less on back-office functions as it increasingly uses digital services to deal with customers.

Shares in the group were flat, trading at 965 pence, still well below the £10.75 per share Murdoch’s 21st Century Fox has offered to pay to buy the rest of the 61 per cent of the company it does not already own.

The deal, announced in December last year, is still being reviewed by the British government and is likely to be referred to the competition watchdog for a full investigation, meaning it will not be approved before next year.

“In some ways, the results are academic as the main driver for the share price is the Fox bid,” Liberum analyst Ian Whittaker said.

“However, with the bid likely to come under review from the competition authorities and subject to political approval, if there is any concern the bid will not go through, the shares could come under pressure as investors focus more on the fundamentals.”