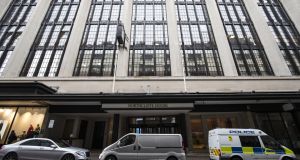 Northcliffe House, offices of British newspaper the Daily Mail in London. Once the Daily Mail owner informed the CCPC, it had to wait for the regulator to investigate the transaction. Photograph: Getty Images

State watchdog the Competition and Consumer Protection Commission (CCPC) voided the deal as the takeover went ahead without its approval, required under mergers law, as the Daily Mail publishes an Irish edition and has a significant business here.

“By implementing the acquisition before receiving clearance from the CCPC, Daily Mail and General Trust plc and JPIMedia Ltd have infringed section 19(1) of the Competition Act,” the commission said.

The  UK’s Competition and Markets Authority (CMA) is separately reviewing the deal.

DMGT notified the commission of the deal on November 29th, which Irish law required the company to do, even though JPIMedia publishes no newspapers in the Republic.

Once the Daily Mail owner informed the CCPC, it had to wait for the regulator to investigate the transaction, and establish that it did not threaten commercial competition here, before approving it.

While the CCPC did not comment on any possible outcome, sources say the commission was likely to have approved the takeover after an initial investigation, as the merger would have made no difference to competition in the Republic’s media market.

The commission’s notice that it has voided the transaction states that the regulator will continue to assess it in line with the Competition Act. DMGT did not comment on the CCPC’s decision yesterday.

The UK’s CMA, which must approve the takeover, last month issued a notice obliging DMGT and JPIMedia to remain separate while it established whether or not their merger would affect competition.