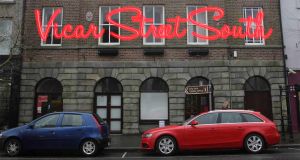 An artist’s impression of Vicar Street South, Gorey, Co Wexford. The Market House building will have the new name in neon and the front car-parking spaces will be removed

The venue is planned for the 18th-century Market House building on the main street in the town, which is owned by Wexford County Council. Mr Crosbie said he had signed a 21-year lease to operate the “multipurpose mini-arena” and would be responsible for funding the stage, and sound and lighting equipment.

Mr Crosbie, who owns a holiday bungalow in Gorey, said the overall cost of the project would be €8 million, with the council securing the balance of funding.

Aiken Promotions has been secured as lead promoter for the venue, where Mr Crosbie plans to run concerts, trade shows and corporate product launches. There will also be community events held at the venue.

Mr Crosbie said he expects to attract a “full programme of international acts”.

Mr Crosbie is hoping to open the 1,500 capacity venue in March 2021 and has written to Ed Sheeran, who has Wexford roots, and Bono to see if they would perform on the opening night. “They might tell me to hump off but God loves a trier,” Mr Crosbie told The Irish Times.

Mr Crosbie started his career in haulage, following in the footsteps of his father and grandfather. But he is better known as a venue owner, having founded the Point Depot (now known as the 3 Arena), Vicar Street in Dublin, the Bord Gáis Theatre and the Convention Centre Dublin.

His venues hosted some of the biggest acts in world music, along with the Eurovision Song Contest, box office theatre hits, several high-profile boxing matches and a range of other events.

After the 2008 financial crash, his loans were transferred to Nama and he lost control of some of his assets. He retained ownership of Vicar Street in Dublin, which originally opened in 1998 where he is planning to add a 200-bedroom hotel to the site on Thomas Street in the Liberties.

“I think it will add to the cultural fabric of Wexford and its catchment area will be the entire southeast of the country,” Mr Crosbie said. “I’m determined to make this the best mini-arena in the world.”

About a year ago, reports circulated that the council had decided to proceed with the venture without Mr Crosbie’s input. He said those differences had been resolved. “We’ve made up...we’re back in business.”