2020: The year when home entertainment and media filled the void

From Fully Charged’s scoop to Netflix’s escapist hits, there was joy amid the gloom 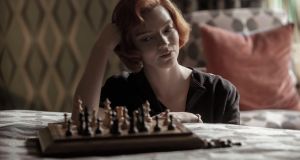 Even by 2020 standards, Life Worth Living felt like a gloomy title for the November report of the Arts and Culture Recovery Taskforce. It was a reference to Barack Obama’s line “the arts are what makes life worth living”, but in the context of shuttered venues, it was easy to dwell on the depressing converse.

Of course, a virus can cancel live performances and keep cinemas dark for the wrong reasons, but it can’t kill arts and culture – not completely. This was the year that called upon home entertainment and media to fill the void and make life worth living as best they could. In some instances, the effects were phenomenal.

What is there left to be said about the popularity of Normal People, the Element Pictures drama made for the BBC and Disney-controlled US streamer Hulu? Clearly, there is nothing like a pandemic to boost demand for a series about good-looking people trapped in cycles of youthful misunderstanding and earnest sex.

Still, the real story was on the news. RTÉ and Virgin Media News both recorded swells in their viewership just as social distancing made newsgathering as surreal as the headlines themselves. RTÉ News Now was your new home for the year’s surprise draw: solemn, fear-inducing briefings from the Department of Health.

As eerie as every chat show felt without a live audience, The Late Late Show capitalised on its public-service strengths, though for once the Toy Show did not top the live television ratings. That honour, which he surely would rather not have had, went to then-taoiseach Leo Varadkar and his emergency address on St Patrick’s Day.

Coronavirus brought an abrupt cessation to the Irish audio-visual production sector, with an estimated 24 television series and films downing tools in March. After much work on safety protocols, shooting resumed in the autumn, and as Désirée Finnegan, chief executive of Screen Ireland, assured an Oireachtas hearing, viewers are unlikely to notice too much of a gap.

In a year in which the worldwide box office was led by Chinese historical war movie The Eight Hundred, with Bad Boys for Life the equally unexpected runner-up, the big winner was Netflix. It warned shareholders that its subscriber growth was being pulled forward by lockdowns rather than accelerated by them, but no note was cautious enough to stop its stock surging amid a menu of escapist or uplifting hits from Tiger King to The Queen’s Gambit.

As for Disney, it at least had the consolation of some spectacular subscriber trends of its own: Disney Plus racked up more than 86 million users in its first 13 months.

Streaming was not a game reserved for giant Californian corporations, as TikTok’s explosion suggested. Musicians, deprived of their usual arenas for performing, used every social avenue available to connect with fans – some, like pop queen Sophie Ellis-Bextor through her Instagram Live kitchen discos, reached new ones.

By the end of 2020, the music business had fully limbered up to the online direct-to-consumer game, with Kylie, Dua Lipa, Gorillaz and others performing paid livestreams. Together with classical music webcasts from the Berlin Philharmonic to our own National Concert Hall, the age of the home “gig” had arrived.

With so many people self-isolating, cocooning or otherwise separated from their social contacts, radio was the perfect friend in a crisis: more human than Alexa, more intimate than Spotify, more adept at reflecting the public mood than just about any other media. The shout-outs were different though. “Tell us what you’re NOT doing,” Graham Norton asked his listeners on BBC Radio 2.

In Irish radio, the delayed release of the Joint National Listenership Research survey pointed to Covid-19 listener windfalls for news programmes such as RTÉ Radio 1’s Morning Ireland, which saw its audience rise to its highest level in about 17 years.

Some audio distractions, however, brought light to the pandemic shade. Who could argue with the award-winning joy of Spin 103.8 presenters Graham O’Toole and Nathan O’Reilly as they finally lured film star and Supervalu endorser Matt Damon to breakfast show Fully Charged?

Alas, feelings of usefulness and relevancy do not pay the bills, and Irish radio, television, print and online media could have done without the second-quarter pause in advertising spend. Television revenues started to come back in the winter as Christmas approached and the disrupted sporting calendar caught up with itself, while Government public health ad campaigns steadied the ship for radio and kept regional print titles afloat. But pay cuts and wage subsidies were not uncommon.

As for RTÉ, the more things change, the more they stay the same. In January 2021, the State-owned broadcaster will open a voluntary redundancy scheme ahead of what could be a very expensive year, especially if Euro 2020 and the Tokyo 2020 Olympics take place next summer.

In the online publishing market, a buyer was found for JOE and Her in Greencastle Capital, but the Covid-19 advertising plummet prompted one former US digital darling BuzzFeed to pull the plug on its UK and Australian news operations. With the crisis inspiring more people to pay for trusted news, market conditions seemed more favourable for media groups with paid-subscription models than those without.

Was it only this year that Independent News & Media (INM) started paywalling “premium” content? Yes, it was. Next year will bring an end to INM, meanwhile, though only because its Belgian owners will rebrand it to Mediahuis Ireland.

Speaking of rebrands, what was originally announced as the Department of Media, Tourism, Arts, Culture, Sport and the Gaeltacht in June was later reinvented as the Department of Tourism, Culture, Arts, Gaeltacht, Sport and Media (TCAGSM), led by Catherine Martin. Notwithstanding this rejig of the pecking order, the unity of media with culture remained a long-awaited victory for logic. It’s not every year there’s one of those.