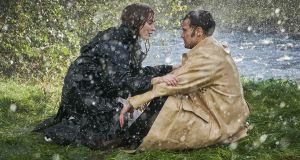 No matter how ‘Irish’ a drama, representations of Ireland and the Irish can be as much about meeting expectations as subverting them.

To reduce nausea caused by Wild Mountain Thyme, the prescription is money, more of it, and not just to pay for national therapy.

Money is needed to pay for film and television drama representations of Ireland that haven’t already been parodied to death and don’t have viewers wondering what century it is meant to be.

Money can also be a useful prophylaxis against cultural cringe, although Wild Mountain Thyme, to be fair, isn’t Irish enough to trigger cultural cringe. Most people gleefully mocking its shawls and stereotypes recognise the romantic comedy for what it is – the vision and product of Irish-America – and neither our responsibility nor our fault.

Well, mostly not our responsibility. Nothing gets made in the State without at least some State support and on this score, I am delighted to inform that public financial backing for Wild Mountain Thyme, which was filmed in Co Mayo, has taken at least three forms: a €280,000 Screen Ireland funding award for Irish producers Port Pictures, assistance from the Western Region Audiovisual Producer (WRAP) fund and a €500,000 to €1 million tax credit through Section 481.

Hey, no system is perfect. Official endorsement of donkey-themed content only strengthens the argument that more money is needed to kick-start then sustain the careers of Irish screenwriters, directors, producers, actors and other creative talents desperate to contribute to an indigenous audio-visual industry that makes Irish people feel seen in a world where Irish-Americans are more richly resourced.

Luckily, there have been some positive indicators on the money front. Some 24 hours before the Wild Mountain Thyme trailer was posted online to immediate howls and splutters, Minister for Tourism, Culture, Arts, Gaeltacht, Sport and Media Catherine Martin was suggesting to the agm of Screen Producers Ireland (SPI) that next year would bring “significant focus” on Irish TV drama.

Admittedly, she wouldn’t be drawn on her views on whether international media companies operating in the Irish market should be subject to production quotas or indeed levies that would create a nice new source of funding for Irish TV drama. But drama was at least on her mind.

“Until recently we saw very little Irish domestic TV drama... the ambition is really to build the indigenous TV drama sector to respond to growth in demand around the world.”

This isn’t a new ambition. Martin was assuring SPI’s independent production company members that the Government remains committed to implementing the Audio-Visual Action Plan launched in 2018, one aspiration of which was to transform Ireland into a “global hub” for TV drama, film and animation.

At the time there was so little happening here on the TV drama side, that talk of a “global hub” came across as a joke, albeit one delivered deadpan via institutional jargon and not in the impassioned language of Jamie Dornan talking to a donkey. Since then, however, there has been progress.

At the start of this year, Screen Ireland’s annual capital budget stood at €17.2 million, still below the €20 million it had reached before the last recession. Next year, thanks to Budget 2021, it will be €9 million higher at €26.2 million. In the interim, the agency was awarded an extra €3 million in the July stimulus package, which it is devoting to its new area of attention: the small screen.

Unsurprisingly, one of the first television dramas Screen Ireland backed – lockdown phenomenon Normal People – came in for a few namechecks during last week’s meeting of the Oireachtas media committee attended by RTÉ director of audience, channels and marketing Adrian Lynch.

“I was a fan of Normal People,” independent TD Peter Fitzpatrick told Lynch. “But I would get annoyed when I read the credits at the end of each episode, which said Normal People was an Irish drama, which is great, produced by Element Pictures for BBC Three. That really annoyed me.”

Until this intervention, it was unclear whether members of the committee were aware that Normal People had merely been acquired by RTÉ and was primarily funded by BBC Three and Disney-controlled US streamer Hulu. The story of its production was not evidence of what RTÉ can do, but rather what it couldn’t and others were.

Although 'an Irish setting isn’t essential', RTÉ Drama 'needs to have broad popular appeal for Irish viewers first and foremost'

Replying to Fitzpatrick’s question as to why “we do not keep everything local”, Lynch observed that Element Pictures was a company “working at the highest level” in a business where international co-productions are the norm, but that it “comes back to funding, to an extent”, with RTÉ’s level of drama output over the past five to six years “way off what we want to be doing”.

Happily, both RTÉ and Virgin Media Television do now seem to be flexing their drama muscles. Virgin, after collaborating with Channel 5 on Blood and The Deceived, has got into co-production bed with Britain’s ITV. Future international co-productions in which RTÉ is involved, meanwhile, include two projects also supported by Screen Ireland: Dublin gangland drama Kin and crime series Hidden Assets. They share a writer in Red Rock creator Peter McKenna, who got his first TV credit on RTÉ’s The Clinic.

At Montrose, the current call-out for drama pitches hints at the cultural tensions involved in co-productions. Although “an Irish setting isn’t essential”, RTÉ Drama “needs to have broad popular appeal for Irish viewers first and foremost”, and “any non-Irish elements in a story to satisfy an international co-production partner needs to be there organically”, it reads.

No matter how “Irish” a drama, in an international industry driven by commercial returns, representations of Ireland and the Irish can be as much about meeting expectations as subverting them. So the odd donkey will slip through. But Wild Mountain Thyme’s Hollywood paddywhackery will matter much less if Irish creators have more of a fighting chance to get their own work made.