Media & Marketing: Building a reputation as a foreign correspondent now a trickier task 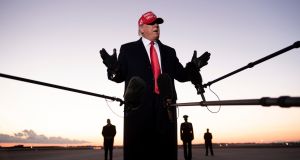 In the outpouring of regard for Robert Fisk, who has died aged 74, journalists one or two generations younger have hailed the acclaimed foreign correspondent as a formative influence. Fisk, known for his reporting in the Middle East, was somebody they wanted to emulate as they embarked on their own careers at the turn of the century or thereabouts.

Would somebody excelling at the same craft as Fisk elicit the same responses today? The question is not intended as a slight on the current active crop of foreign correspondents, but as a response to the less certain ground on which they now stand within an industry that increasingly acts as if it no longer needs them. Fisk’s line of work may not have the same cachet among the “cub” reporters of 2020 for the simple reason that the line of work itself is afforded lower priority than it once was.

Though the sight of press hordes elbowing for space on election day does not suggest any kind of problem, that doesn’t mean there isn’t one

It might seem like a strange day to mention newsrooms’ diminishing allocation of resources for the “our man/woman in...” model. The world’s media has descended upon Washington DC and a select group of swing states to translate the quadrennial circus that is the US presidential election for audiences in their home countries. Those who have parachuted into Trump Central, now with added barricades, will supplement the semi-permanent ranks of foreign journalists for whom Trump versus Biden is their Olympics, complete with possible photo-finish.

As a case study of how the art of foreign correspondence is faring, Washington is atypical. It remains a busy if expensive hub for overseas news outlets, while for reporters – who these days often double as their own photographers and camera operators – the US gig is an attractive, even glamorous posting. The US is the largest economy in the world (still) and a cultural leader (still). It retains top spot in the military superpower charts. When the US sneezes, the rest of the world begs it to wear a mask.

Though the sight of press hordes elbowing for space on election day does not suggest any kind of problem, that doesn’t mean there isn’t one. Indeed, if there were any lingering doubts about Donald Trump’s chilling effect on media freedoms, they have been eliminated by a recent move to slash the length of foreign journalist visas.

When journalists want to work on US soil, they apply for an “I” visa, which for now is valid for up to five years, permitting an individual correspondent to cover a full presidential election cycle. However, the US Department of Homeland Security has proposed that the maximum length of these visas should be just 240 days, with the possibility to extend it only once for a further 240 days. The reaction has been unequivocal: this is unacceptable.

The European Broadcasting Union (EBU) has brought together 24 organisations – including the World Association of Newspapers and News Publishers, Reuters, the Associated Press, Agence France-Presse, News Media Europe and Index on Censorship – for a joint statement that warns the measure “threatens to seriously jeopardise the exercise of journalistic freedom” and would “seriously impact the work of the foreign media”.

News organisations, the statement notes, commonly send correspondents to the US for two to five years – a period of time that “allows the individual journalists to better understand the country and therefore better report on it to the rest of the world”.

I think I could spend several decades in the US, doing a tour of every zip code, and head for the departure lounge understanding the place less than I did on arrival. But the point is moot: eight months is barely enough time to figure out how to procure edible chocolate, never mind establish the array of contacts that will make the visa application process worth the pain.

The China rule is at play here: the harder it is to do journalism in any jurisdiction, the more important it is to try

One aim of foreign reportage is to deepen your knowledge of a country’s nuances to the level where, if “the locals” were to stumble upon what you were saying about them, they wouldn’t die laughing – a reaction that Irish people have been known to have when consuming American journalists’ helicopter takes on Ireland. A regime of shorter-term visas promotes the novice over the skilled, seasoned hand.

This visa shrinking is not a done deal, but nor would the prospect of them necessarily disappear with a Biden victory. According to Robert Mahoney, deputy director of the Committee to Protect Journalists, the media will have “a fight on our hands” if Trump remains in power, but it shouldn’t be assumed that under a Biden administration “these proposed restrictions will die of neglect”.

Either way the China rule is at play here: the harder it is to do journalism in any jurisdiction, the more important it is to try.

Foreign correspondents have long contended with state hostility in all its forms. For many, the existential threat springs instead from the same technological change that allows all journalists to do their jobs with greater ease.

The most famous examples remain those who built their reputations in days when their intended audience had access to just two or three broadcasters and bought one or two newspapers. When they made their names, they weren’t merely the trusted interpreter of distant lands, they were one of a small number of available guides.

The internet has not only given people in the countries being reported upon the opportunity to swiftly clap back at inaccuracies and insensitivities, it has also splintered audience loyalty across a wider spectrum of news outlets, both domestic and international. Household-name foreign correspondents have become less of a phenomenon.

We should celebrate those still plying this trade, against the odds, lest journalistic freedom, journalists and freedom itself become ever more precious commodities.