Seen & Heard: also in the headlines was the charity that has made a windfall from selling Ryanair shares, Aer Lingus and its pilot loans, and refinancing the Square’s debt 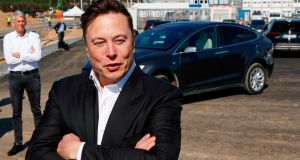 Tesla founder and chief executive Elon Musk, who has seen billion of dollars added to his wealth during the pandemic as shares in his company have soared. Photograph: ODD ANDERSEN/AFP via Getty Images

Tesla boss Elon Musk, Amazon founder Jeff Bezos, and Bernard Arnault, head of the business that makes Hennessy brandy and Louis Vuitton handbags, are among 10 of the world’s richest people who have boosted their wealth by more than €300 billion since the Covid-19 crisis began, the Observer claims.

The British newspaper says that the trio and seven other super-rich figures have added $450 billion (€367 billion) to their fortunes since March, more than the €310 million that the UKs’ tory government has spent on tackling the virus.

A charity with links to Ryanair chief Michael O’Leary and his wife Anita O’Leary sold almost €22 million worth of shares in the airline last week, The Business Post reported.

According to the newspaper, the trustees of the Gigginstown Settlement, who include the O’Learys, bought 1.4 million Ryanair shares in September when they were priced at €11.35 each.

The trustees sold the shares on Thursday, when the stock was quoted at €15.60, netting a profit of €6 million. The charity supports education, health and sporting bodies.

Ryanair told the newspaper that it has a policy of not commenting on Mr O’Leary’s personal affairs. The airline’s shares closed last week at €16.30, about twice the price to which they fell in March, when air travel shut down in the face of the Covid-19 pandemic.

Square Shopping centre owner, private equity fund Oaktree Capital management, is confident that it can secure a deal with AIB to refinance the Tallaght, Dublin, retail mall’s €186 million debt, according to the Sunday Times.

Oaktree bought the property from Nama for €250 million in 2018 through a Luxembourg company. It is due to repay the cash it borrowed from AIB to fund the deal in the first quarter of next year.

The newspaper reported that accounts for one of the Square’s operating companies, Indego, state that the owner, OCM Luxembourg Square Retail, is working closely with asset managers Sigma Retail Partners and AIB on “assumptions around future liquidity”.

The accounts predict that trading would return to normal in the fourth quarter of this year. However, the newspaper noted that this did not materialise, as the Government imposed a second lockdown in October that lasted until this month.

A new interest-free loan scheme for Aer Lingus pilots to support them while on reduced wages has complicated the airline’s industrial relations environment, according to the Sunday Independent.

Aer Lingus has offered pilots up to €4,000 each to see them through the pandemic and now ground staff are demanding similar loans. The 600 pilots will be able to draw down interest-free loans early next months from a fund agreed with management, the report states.

Appian Asset Management is following its new British owner into the market for investment opportunities in social housing with a new €100 million fund. The Sunday Times said the money would be used to acquire up to 400 newly-built residential units in Ireland for lease to local authorities and approved housing bodies.

The move comes as Appian last week said it was being bought for up to €10 million by London-listed Gresham House, which has more than €300 million invested in social and affordable housing in the UK.