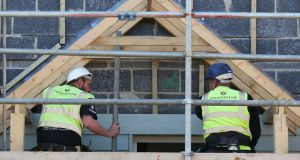 Shares rallied on Thursday after China and the US pledged to hold trade talks.

Airline Ryanair climbed 1.26 per cent to €13.665 amid signs that recent industrial relations problems at the low-cost carrier had eased. Mediation talks between the company and the Irish Airline Pilots’ Association adjourned in the small hours of Thursday morning and will resume on Friday.

“The stock is getting a bit of relief after being badly beaten up over the last while,” said one trader.

Hotel group Dalata advanced 2.63 per cent to €7.02 on the back of recent strong tourism data from both the Republic and UK.

Kingfisher, owner of DIY chain B&Q, ended the day towards the bottom of the FTSE 100, shedding 13.9 pence sterling to end on 274.5p. B&Q’s sales rose 3.6 per cent but its French business Castorama dragged on results, with like-for-like sales dropping by 3.8 per cent in the period.

Elsewhere, shares in MoneySupermarket.com and GoCompare.com were knocked amid fears that Amazon is laying the groundwork for its own insurance comparison website.

Shares in MoneySupermarket.com closed down 15.5p at 283.7p. GoCompare.com fell as much as 10 per cent at the start of trading but ended flat at 114p.

Shares in Antofagasta, Glencore, Fresnillo, Rio Tinto and BHP Billiton all rose between 0.9 and 2.5 per cent.

Shares in Italian toll road group Atlantia plunged after the country’s government warned that it could end contracts to operate motorways from its subsidiary Autostrade per Italia following the Genoa bridge disaster that left at least 39 people dead.

Atlantia’s shares closed 22.26 per cent down at €18.30 on Thursday after reaching a 52-week low of €17.265 at one point. Autostrade said it was co-operating with an investigation into the bridge’s collapse and was holding its own internal inquiry.

Irish-Swiss baker Aryzta ticked up 0.77 per cent to 9.46 francs in Zurich. It emerged yesterday that the company, which this week announced plans to tap shareholders for €800 million, is spending €33 million on expanding a Brazilian bakery.

French outdoor advertising firm JCDecaux, which has sites in the Republic, rose 7.1 per cent thanks to analysts at Berenberg upgrading the stock to “buy”, saying they thought Google’s possible entry into the outdoor ad market in Europe could be good news.

Shares in Dutch marine and engineering company Boskalis fell 3 per cent after it reported first-half earnings that missed estimates due to loss-making transport activities at its offshore energy division.

German pharmaceuticals group Bayer lost another 4.6 per cent, the top DAX faller, taking losses this week to more than 17 per cent after a ruling against subsidiary Monsanto over alleged links between a weedkiller and cancer.

US stock indices rose, aided by upbeat earnings from Walmart and Cisco and easing trade worries. Walmart shares surged 10.2 per cent, the most on the S&P 500, after the retailer said US comparable sales grew the most in a decade and posted strong ecommerce sales.

The S&P retailers’ index gained 0.81 per cent. All of the 11 major S&P sectors were higher, with technology stocks up 0.92 per cent.

Cisco rose 3.7 per cent after posting quarterly results and first-quarter sales forecast that topped Wall Street expectations. Symantec jumped 7.1 per cent after hedge fund Starboard Value disclosed a stake in the cybersecurity firm and nominated five directors to its board.

Aircraft manufacturer Boeing, one of whose biggest customers is Ryanair, rose 4.2 per cent, also gaining on a bullish outlook by brokerage firm UBS.

Industrials rose 1.4 per cent on hopes that Beijing and Washington may resolve a conflict that has agitated financial markets since early March. – Additional reporting: Reuters