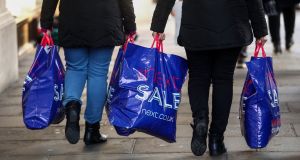 UK economic growth rebounded in the second quarter as retail sales and construction benefited from a warm weather boost.

The Office for National Statistics (ONS) said gross domestic product (GDP) grew by 0.4 per cent between April and June, compared to the first three months of the year.

That figure was in line with economists’ estimates.

It comes after growth slumped to 0.2 per cent amid frosty weather brought in by the Beast from the East in the first quarter.

But growth slowed on a monthly basis, with GDP rising just 0.1 per cent in June, down from 0.3 per cent in May and lower than the 0.2 per cent growth logged in April.

ONS head of national accounts Rob Kent-Smith said: “The economy picked up a little in the second quarter with both retail sales and and construction helped by the good weather and rebounding from the effects of the snow earlier in the year.

“However, manufacturing continued to fall back from its high point at the end of last year and underlying growth remained modest by historical standards.”

Sterling edged up slightly versus the dollar following the news, but was still trading 0.5 per cent down at 1.27. Against the euro, the pound was up 0.1 per cent at 1.11.

Data showed the UK’s powerhouse services sector – which accounts for about 79 per cent of the economy – grew by 0.5 per cent in the second quarter, marking the strongest quarterly expansion for the sector since the end of 2016.

It reflects a pick-up in wholesale and retail trading, both of which were affected by the adverse weather earlier in the year.

Data released by the ONS also showed a 0.3 per cent rise in household spending, though employee pay growth slowed to 0.6 per cent from 1.1 per cent in the first quarter, due to weaker growth in wages and salaries.

Construction output recovered in the second quarter, rising by 0.9 per cent but still coming in below last year’s quarterly average of 1.1 per cent.

The sector was boosted by non-housing repair and maintenance as well as public housing work, but was knocked by a slump in private house-building.

The production industry contracted 0.8 per cent, due to a slump in manufacturing, particularly in machinery, metal products and transport equipment.

Production was also dragged down by a 2.7 per cent fall in energy supply.

While the cold snap earlier this year boosted energy demand in the first quarter, the recent spate of warm weather led to a fall in electricity and gas production in April and May.

ONS figures also detailed a 0.5 per cent rise in business investment in the second quarter.

Commenting on the GDP data, PwC’s senior economist Mike Jakeman said: “The overall picture is of an economy performing moderately better than it did three months ago, but one struggling for any real momentum.

“The new monthly GDP measure showed growth slowing in June, to 0.1 per cent, from 0.3 per cent in May.

“Although a renewed fall in the pound will support exports and high employment, and slowing inflation ought to boost consumer spending, these positive factors are likely to be counterbalanced by a slowing global economy, a small increasing in borrowing costs and further Brexit-related uncertainty.

“In short: tepid growth is likely for the next 18 months at least.”

The total UK trade deficit widened by £4.7 billion to £8.6 billion in the three months to May, mainly due to falling goods exports and rising goods imports, with net trade dragging on GDP growth as a result.

The UK imported the bulk of its goods from EU countries, with 55.3 per cent coming from the bloc in the second quarter, while 49.2 per cent of UK exports were EU-bound.