Russia to offload more US securities amid sanctions

Moscow to shift from dollar in settlements towards rouble, euro and other currencies 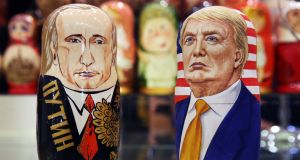 Russian dolls in the likeness of Russia’s president Vladimir Putin and US president Donald Trump: Russia will regard any US move to curb its banks as a “declaration of economic war”. Photograph: Mikhail Pochuyev\TASS via Getty Images

Russia will further decrease its holdings of US securities in response to new sanctions against Moscow but has no plans to shut down US companies in Russia, finance minister Anton Siluanov said on state television on Sunday.

Prime minister Dmitry Medvedev said on Friday that Russia would regard any US move to curb the activities of its banks as a “declaration of economic war” and would take retaliatory action.

Some of Wall Street’s biggest banks are warning investors to steer clear of Russian assets after the rouble’s worst week since the 2015 oil crash amid mounting risks of crippling sanctions from the US.

Morgan Stanley turned bearish and UBS Group closed its recommendation to buy the Russian currency, with analysts at both banks saying in notes published on Thursday that the risks outweigh the reward for owning the rouble. Diana Amoa, a money manager at JPMorgan Asset Management, puts the likelihood of curbs on Russian sovereign debt at as high as 50 per cent.

The rouble retreated more than 6 per cent last week to a two-year low as contagion from the crisis in Turkey compounded tensions with the US. A fresh batch of sanctions added to mounting concerns that the US is about to start ratcheting up the severity of its restrictions against Russia. The worst-case scenario is a Bill introduced in Washington last week that seeks penalties on banking transactions and new Russian sovereign debt as punishment for meddling in the 2016 presidential elections.

Speaking on a weekly TV talk show, Mr Siluanov said the new US sanctions, some of which could restrict purchases of Russian government bonds, were “unpleasant but not fatal”.

“We have lowered to the minimum level and will further decrease our investment in the US economy, in the US securities,” Mr Siluanov said, shedding light on the nature of an unexpected drop in Russia’s holdings of US treasury bonds.

Russia has ditched its holdings of US treasuries in the past few months as relations between Moscow and Washington have deteriorated, data showed last month.

Russia will also have more settlement in roubles and other currencies, such as the euro, than in dollars, Mr Siluanov said.

“Eventually, this will negatively impact US investors. But we are not planning now any limitations such as shutting down McDonald’s,” Mr Siluanov said.

He referred to calls by some lawmakers to shut down prominent US companies in Russia, starting from 2014, when relations with the West soured over Russia’s annexation of Crimea and its role in Ukraine’s crisis.

While admitting that US sanctions would boost inflation in Russia as they hurt the rouble, Mr Siluanov said there were no plans to ban using the dollar in Russia. “Of course, the government has no such plans. That would be a step to an impasse.” – Reuters/Bloomberg

1 How to gift your child a house deposit . . . tax free
2 BOI customers to be charged twice with bank fees on New Year’s Eve
3 Family in court dispute over hotels in Dublin and Galway
4 Stripe in talks for new funding at much higher valuation
5 Irish start-up which developed facial recognition for cows raising over $50m
6 Ryanair warns it may reduce more Irish services and relocate operations
7 Irish designer of Oxford vaccine: ‘I’ve never worked so hard in my life’
8 Workers have little idea of the cost of retirement income
9 Greencore business ‘absolutely smashed’ by Covid-19, says CEO
10 Willie Walsh appointed head of the International Air Transport Association
Real news has value SUBSCRIBE