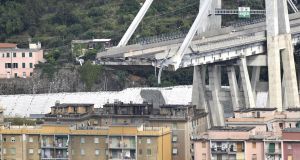 Shares of Italy’s Atlantia, which owns Autostrade, fell 5.4% after a large section of the Morandi viaduct upon which the A10 motorway runs collapsed in Genoa. At least 22 people are believed to have died. Photograph: Flavio Lo Scalzo/EPA

World share markets rebounded on Tuesday as Turkey’s lira pulled out of a recent nosedive, and reassuring data from Germany helped offset the latest wobbles in China’s giant economy.

AIB fell by more than 1.1 per cent to close the session at €4.94. The stick slid follows a note from stockbrokers Davy that downgraded earnings forecasts, and suggested the bank has very little scope left to cut deposit rates. Bank of Ireland fared even worse, down 1.7 per cent to close at €7.36 per share.

Aryzta’s share price continued its yoyo performance, bouncing back by 18 per cent on the Dublin market to €8.48, although its main listing and much of its trading is in Zurich. It regained some of the ground it lost on the Iseq on Monday when it announced it intends to raise €800 million from investors.

Insurer FBD rebounded to €10.85 after climbing 3.3 per cent. The share opened in the black in morning trading, and stayed there for the day. Investors are relieved that an investigation cleared Fiona Muldoon of wrongdoing following a personnel complaint.

UK shares ended the day down 0.4 per cent after a choppy session, weighed down notably by lower copper prices.

Shares in Antofagasta fell 7 per cent, making it the worst performer, after reporting first-half core earnings down 16.2 per cent versus a year earlier. The Chilean copper producer cited weaker ore quality and higher costs.

London copper fell after data showed the Chinese economy was cooling, suggesting demand from the world’s top consumer of the metal could slow. Other miners also traded in the red, including Fresnillo, down 1.5 per cent, while Rio Tinto and Glencore retreated 1.3 per cent and 0.8 per cent respectively.

Anglo-Australian mining giant BHP rose 0.5 per cent, however, after the union at its Escondida copper mine in Chile called off a strike.

Britain’s Royal Mail fell 1.6 per cent after it was fined £50 million for discriminating against Whistl, its only major competitor delivering letters.

Shares of Italy’s Atlantia, which owns Autostrade, fell 5.4 per cent after a motorway bridge collapsed in torrential rains in the northern Italian port city of Genoa, killing at least 22 people.

Some positive corporate earnings reassured investors. German utility RWE rose 3.6 per cent after it said its Innogy deal was on track and reported in-line first-half profits.

Swiss dental implant maker Straumann was a top gainer after results, up 4.5 per cent after it raised its full-year revenue target as organic sales growth exceeded 20 per cent for the first time in 10 years.

Siltronic shares fell 4.4 per cent after Citi downgraded the stock to “neutral”, saying the stock was now trading close to fair value and there was limited scope to raise estimates.

All 11 major S&P sectors were trading higher heading into the afternoon, with financials rising 0.63 per cent. Shares of US lenders – Citigroup, JPMorgan, Wells Fargo, Bank of America, Goldman Sachs – rose between 0.2 per cent and 1 per cent.

Among the encouraging earnings reports was Home Depot , whose shares climbed 1 per cent after the home-improvement retailer beat analysts’ quarterly sales estimates despite signs of a slowdown in the housing market. The report from Home Depot, a member of Dow Jones Industrial Average, sent the shares of smaller rival Lowe’s higher by 1.2 per cent.

Technology shares rose 0.66 per cent and was the biggest boost to the benchmark index, led by Microsoft’s 1.1 per cent rise. Also lifting the sector was Nvidia, which gained 2 per cent, after the company rolled out its newest generation of chip technology.

Tapestry jumped 13 per cent, the most on the S&P index, after strong sales of its Kate Spade handbags helped the company’s full-year forecast top analysts’ expectations. – (Additional reporting: Reuters/Bloomberg)