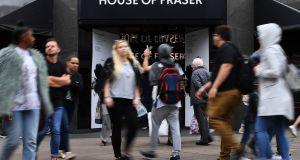 Sports Direct’s shares were down 0.7 per cent after the British sportswear retailer snapped up House of Fraser for £90 million

European shares fell on Friday as a dramatic fall in the Turkish lira jolted markets, with banks such as Spain’s BBVA and Italy’s UniCredit hit by worries over their exposure to Turkey.

The pan-European STOXX 600 index closed down 1.1 per cent, losing 0.9 per cent on the week, as investors fretted about the political and economic repercussions of the Turkish crisis.

The Turkish lira fell to record lows as concerns over a widening rift with the United States persisted after a Turkish delegation returned from talks in Washington with no apparent solutions.

Dublin followed other European bourses lower, with the Iseq index closing down almost 1 per cent to 6,681.97.

Troubled Irish-Swiss baker Aryzta, whose shares hit a 52-week low earlier in the week, were down almost 10 per cent in Dublin, trading to €8.15.

Shares in Ryanair, which had to cancel hundreds of flights across Europe due to pilot strikes, closed down 4 per cent to €12.98. Elsewhere, bookmaker Paddy Power Betfair slid 2.9 per cent to €81.30, while insurer FBD was up 3 per cent to €10.20.

Anxiety over emerging market assets also sent Britain’s FTSE 100 down, with the index declining 1 per cent, though it outperformed Germany’s DAX, which dropped 2.1 per cent.

The FTSE 100 fell despite a slide in sterling, which usually supports the exporter-heavy index. The negative relationship between the two has evaporated recently.

Sports Direct’s shares were down 0.7 per cent after the British sportswear retailer, controlled by tycoon Mike Ashley, snapped up House of Fraser from the department store group’s administrators for £90 million. Shares in Debenhams, in which Sports Direct booked an £85 million charge last month, were up 1.6 per cent.

Smaller UK-listed stocks exposed to Turkey and nearby emerging markets were also bruised. DP Eurasia, a franchisee of Domino’s Pizza which generates 68 per cent of sales in Turkey, sank 14.4 per cent to the bottom of the small-caps index. Travel operators On The Beach and Thomas Cook, which sell package holidays to Turkey, fell 4.1 per cent and 1.9 per cent respectively.

Shares in France’s BNP Paribas, Italy’s UniCredit and Spain’s BBVA fell 3 per cent, 4.7 per cent and 5.1 per cent respectively. Jefferies analysts said Turkey contributed 14 per cent to BBVA’s first-half group profit and 9 per cent to UniCredit’s consolidated profit, although their capital exposure is limited. Both banks have said a 10 per cent fall in the lira could shave two basis points off their capital adequacy ratio.

Elsewhere, a profit warning from K+S sent shares in the German potash miner tumbling 7.2 per cent, to the bottom of the Stoxx index.

Another big loser was the tech sector, which was down 1.5 per cent, with chipmakers at the sharp end of selling. STMicro, Siltronic, Infineon and AMS lost 5.1 per cent, 6.3 per cent, 2.8 per cent and 3.9 per cent as negative sentiment pervaded semiconductors after disappointing results from US chipmaker Microchip, a bellwether for the industry.

US stocks slid on Friday, with banks taking the biggest hit, as concerns over Turkey’s economy and its deepening rift with the US roiled stock markets around the world.

Citigroup, the most global among the major US banks, fell 2 per cent. JPMorgan, Wells Fargo and Bank of America were all down about 1 per cent. Investors fled to safe-haven assets, with the dollar rising to a 13-month high and US bond yields slipping to a three-week low. Shares of trade-sensitive companies also declined, with Boeing, 3M and Caterpillar falling between 1.5 per cent and 2 per cent.

Microchip shares fell 11.8 per cent, the biggest decliner on the S&P, after it forecast disappointing second-quarter revenue.