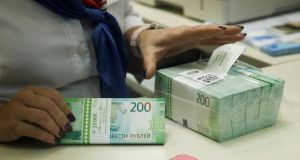 A cashier holds new 200 rouble banknotes in a bank in Moscow. The rouble extended its steepest slide in almost two years as new US sanctions over the country’s alleged use of chemical weapons rattled investor faith in the markets of the world’s biggest energy exporter. Photograph: Maxim Shemetov/Reuters

The Russian rouble extended its steepest slide in almost two years and government bonds slumped on Thursday as new US sanctions over the country’s alleged use of chemical weapons rattled investor faith in the markets of the world’s biggest energy exporter.

The Trump administration said overnight that fresh sanctions were needed after it determined Moscow had used a nerve agent against a former Russian agent and his daughter in Britain, something the Kremlin has repeatedly denied.

The moves came just days after a bipartisan group of senators proposed a law mandating “crushing sanctions” – including on purchase of new sovereign debt and on big state banks – to punish Russia for election interference.

Russia’s embassy in the US called the measures draconian and the country threatened to retaliate. However, it stopped short of specific measures pending more details on the US plans.

The rouble lost as much as 1.8 per cent to 66.73 against the dollar at the start of trading in Moscow after a more than 3 per cent rout on Wednesday – taking it to a two-year low. It pared those losses to trade at 65.80 as western European markets opened.

“There is local panic on the currency market,” BCS Brokerage said in a note. “At times, the number of those who want to ditch the rouble is becoming so high so there is not enough liquidity.”

The Russian currency is on track for its deepest weekly fall since early April when it lost 6.7 per cent after Washington imposed sanctions on Russian companies to punish Moscow for “malign activities”.

Thursday’s drop followed a massive sell-off on the Russian market the day before, after the Kommersant daily published what it said was the full text of a draft US law detailing a separate of series of possible penalties against Russia. Analysts warn of dire consequences for the rouble if the measures pass through Congress.

“If the bill becomes law and Russia retaliates, we estimate that [the dollar rouble exchange rate] could move to 72, while the euro/rouble rate could hit 83.50, as any major sell-off of Russian local debt, local credit and stocks would amplify outflows from the rouble,” Danske Bank said in a note.

With the threat of sanctions multiplying, concern is also growing about the lack of a reaction to the sell-off from Russian financial authorities, analysts at Rosbank said in a note. The central bank did not immediately reply to a Reuters request for comment on the rouble’s drop and its possible consequences.

The Russian government only managed to sell half the amount planned in a bond auction on Wednesday.

Russia’s largest airline Aeroflot fell 12.25 per cent to 98.15 roubles, its lowest since August 2016, after Washington said it was considering suspending the carrier’s flights to the United States.

The initial round of these sanctions will limit exports to Russia of US goods and technology considered sensitive on national security grounds.

The State Department said the new sanctions would come into effect on 22 August and would be followed by much more sweeping measures, such as suspending diplomatic relations and revoking Aeroflot landing rights, if Russia did not take “remedial” action within 90 days.

The new US sanctions placed on Russia may put the country’s longer-term crude production potential at risk. America’s ban on exporting certain “sensitive” goods and technologies may be a bitter pill for the Russian oil producers to swallow as the 11-million-barrel a day industry is heavily reliant on foreign drilling and refinery equipment.

If the new sanctions affect the Russian oil and gas industry directly it could have a significant impact, especially if Europeans support the penalties, according to Dmitry Marinchenko, oil and gas director at Fitch Ratings. “New LNG, refinery, and petrochemical projects may be under threat,” Mr Marinchenko said, as Russian and Chinese equipment may not be a working alternative to US and European products. “Oil production may be affected on the more complicated projects.”

Russian oil companies may need to search for new markets for as much as 500,000 barrels a day of crude and oil products which the US could no longer import if the Trump administration continues to toughen its sanctions against the Kremlin. The potential loss of exports to the US market, however, is a lesser problem than being excluded from Asian and European buyers. Every day Russia exports over 5 million barrels of oil and condensate, mostly to Asian and European markets. – Reuters / Bloomberg