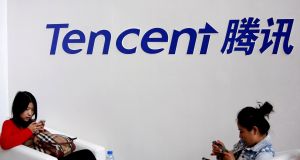 Ireland’s Iseq shares index fell to its lowest level in four months as global markets were spooked by the ongoing currency crisis in Turkey and signs that growth in China is slowing.

A strengthening dollar and disappointing earnings from Chinese technology giant Tencent Holdings helped drive the emerging markets index into technical bear territory - down 20 per cent from its January peak - adding pressure to the global picture. It came a day after a series of Chinese economic statistical releases - from factory output to retail sales and credit creation-fell short of market expectations.

Banking stocks were out of sorts, with Bank of Ireland falling 3.5 per cent to €7.10 and Permanent TSB declining by 1.2 per cent to €2.06 as financials remained firmly off the shopping list of investors globally.

Market heavyweight CRH fell 1.7 per cent to €27.83 as investors fretted about global trade tensions as Turkey increased tariffs on US imports.

Independent News & Media fell by as much as 16.5 per cent during the session in Dublin, before closing down 5.6 per cent at 8.5c. Dealers said, however, that there was no news circulating the market about the stock.

Britain’s top share index sank on Wednesday as emerging markets stress and a sharp sell-off in commodities drove down stocks across Europe, with investors running scared after trade spat deepened between Turkey and the US.

Heavyweight miners Rio Tinto, BHP Billiton, Glencore and Antofagasta all fell between 3.6 per cent and 5.9 per cent as the price of copper fell to its lowest in more than a year on the back of a resurgent dollar.

“As the greenback keeps barrelling higher, pressure on other key commodities like base metals and gold is an additional drag on Europe stocks,” Ken Odeluga, market analysts at City Index, said.

However, promising results from a study lifted shares in Britain’s biggest drugmaker GlaxoSmithKline 1.9 per cent. A long-acting injection developed by GSK has proved as effective as standard daily pills for controlling the AIDS virus.

Admiral Group topped the FTSE 100 with a 3.2 per cent gain after the insurer reported a better-than-expected rise in first-half pretax profit.

Autos stocks were among the worst performers, pushing the Dax down 1.4 per cent to a six-week low after Turkey doubled tariffs on US alcohol, car and tobacco imports.

The autos sector was down 1.9 percent, near lows hit when trade war fears gripped markets at the start of July.

Miners fell 4.2 per cent in their biggest daily loss since the Brexit vote aftermath in June 2016, as renewed anxiety over trade piled pressure on a sector already dented by falling copper prices.

Atlantia, which owns Autostrade per l’Italia, was down 5.4 per cent after Italy’s transport minister called for the resignation of senior managers of the company which operated the motorway bridge that collapsed in Genoa on Tuesday.

US stock indexes were also lower in mid-afternoon trading on Wall Street, with trade-sensitive companies such as Boeing and Caterpillar among the heavyweight decliners.

The high-flying technology stocks - Facebook, Apple, Amazon, Netflix and Google-parent Alphabet - were all in negative territory.

Tesla fell after Fox Business Network reported the US securities regulator has subpoenaed the company regarding chief executive Elon Musk’s plans to take it private and his statement that funding was “secured.”