Relief for investors after market rally closes out a disastrous October 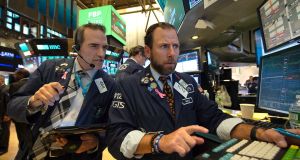 European shares rallied on Wednesday as a tumultuous October drew to a close and strong results from L’Oréal, Sanofi, and banks Standard Chartered and Santander soothed investors’ nerves.

As General Motors posted strong figures, US stocks also rallied for a second day to close out one of the worst months of the bull market on an upbeat note.

Smurfit Kappa finished up 0.5 per cent in its London listing and, in Dublin, it was up more than 3 per cent at one stage after it announced solid results and a Serbian acquisition. But it fell back fractionally into the red in the last hour of trading to close at €28.78.

Tullow Oil finished up 3.79 per cent to €2.55, as the oil sector generally performed well across Europe following BP’s results.

CRH rose close to 3 per cent to close at €26.43, while Glanbia, another Irish company with heavy US exposure, rose more than 2 per cent to €15.62. Both companies benefitted from the warm glow being felt on Wednesday in the offices of Wall Street institutional investors.

The blue-chip FTSE 100 rose 1.3 per cent, with energy and financials providing the biggest lift as results eased investor worries. UK shares rose to a three-week high.

Investors drew comfort from Standard Chartered’s better than expected profit even as the Asia-focused lender warned that the escalating Sino-US trade war was weighing on business sentiment in its core emerging markets. The shares were up 3.2 per cent.

Among the handful of losers on the blue-chip board was retailer Next, down 1.9 per cent after the British clothing retailer reported a slowdown in sales growth.

William Hill’s bet on Swedish gaming company Mr Green triggered a rally in both stocks and the sector. William Hill rose 1.1 per cent but off earlier highs. Computacenter sank 12.6 per cent after the IT services company delivered a tepid forecast for the final quarter.

L’Oreal shares jumped 6.7 per cent after sales growth at the company, whose brands include Maybelline, picked up pace in the third quarter, driven by booming demand in Asia. This bucked the trend of results elsewhere this quarter warning of slower Chinese growth.

Shares in French pharmaceuticals giant Sanofi rose 6.7 per cent after it confirmed its return to growth with higher-than-expected third-quarter profits and raised its 2018 profit target for the second time this year.

Finnish tyre-maker Nokian sank 10 per cent after it cut its profit outlook, blaming unfavourable currency moves, high inventory levels in Russia, and lower new car sales in the Nordics for a surprise fall in quarterly earnings.

Drugmaker Swedish Orphan Biovitrum dropped 13.6 per cent after it cut its full-year outlook due to development costs, even though it lifted its sales forecast after a strong performance by haemophilia drug Elocta.

Shares of Facebook gained 3.7 per cent after the social media giant said margins would stop shrinking after 2019 as costs from scandals ease.

The S&P communication services sector, which also houses Alphabet and Netflix, rose 2.33 per cent. Amazon. com and Apple, other members of the FAANG group, climbed 4.4 per cent and 2.9 per cent, respectively.

General Motors shares jumped 8.3 per cent and were on track to post their biggest one-day gain since late May, after the US automaker posted robust quarterly results and forecast strong full-year earnings.

Yum Brands rose 4.5 per cent and Yum China Holdings 14.7 per cent as strong KFC sales drove results. The financial sector rose 1.90 per cent and the S&P 500 regional banks index gained 2.77 per cent, on the US Federal Reserve’s proposal to ease regulations for banks with less than $700 billion in assets.