No elegant way for ageing US bull market to end 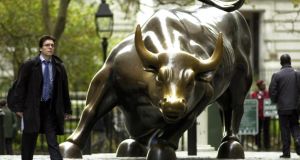 The charging bull statue near the New York Stock Exchange. “The greatest risk of carnage if this bull market is unwinding is the outsized valuations attached to the tech sector.” Photograph Mandel Ngan/AFP/Getty Images

There is really no elegant way for an ageing bull market to leave the stage. It can be carried off after expiring from old age, or it can die of euphoria, as the late investor John Templeton used to argue, or it can exit the Shakespearean way, pursued by a bear. It is not a pretty sight, however it ends.

Investors have been enjoying a rampaging bull market for the past nine years. It was only two months ago that we were invited to celebrate “the longest bull market in history”, which has seen the S&P 500 index roughly quadruple in value since 2009. Yet there were signs this week that the curtain is about to fall. A mix of uncertain earnings, a stronger US dollar and the gathering headwinds of global affairs may be about to turn investors’ heads.

The question of how it will end is especially important for this bull market because it is different – at least in its most recent and intense phase – to any that preceded it. The crucial fact about today’s elevated US stock market is that its rise has been fuelled mainly by investors’ obsession with technology stocks – the so-called Faangs – Facebook, Apple, Amazon, Netflix and Google.

Since the start of this decade, these five companies have disrupted the way the world does business more, perhaps, than any group of companies since the Industrial Revolution. Their success has attracted a cult-like devotion from investors.

Consider Amazon, the tech-retail giant that is laying waste to the high street. So far this year, its market value has jumped by almost 50 per cent. That is a rise of $300 billion (€265 billion) – which is roughly the market value of oil company ExxonMobil. Also this year, Apple became the first US company to achieve a market value of a trillion dollars ($1,000 billion). But the peak is resting on narrow foundations, which began to look decidedly rickety this week.

On Wednesday, US stocks gave up the last of the gains they had made during 2018. There was a rebound on Thursday, when those losses were almost entirely reversed. But more selling came ahead of the market’s opening on Friday, when tech stocks took another hit from their uncertain earnings outlook.

Shares in Amazon fell 9 per cent, and Google’s dropped by 5 per cent, after the company’s quarterly earnings report. Investors were spooked by the failure of both companies to do what they had done during a string of previous quarters – beat expectations for current and future earnings growth. It seems to have come as a shock to some investors that earnings can be missed as well as beaten.

Yet the rickety nature of the market today is not just about cloudy earnings outlooks. The bull market has been accompanied and fuelled by a booming US and global economy and a decade of unprecedented low interest rates. Global trade has been rising, led by China, whose emergence as an economic superpower is the most striking development in international affairs since the global financial crisis.

These factors are now unwinding, and may be a bigger threat to stock prices. The US and China are engaged in an all-out trade war. Growth in Europe has slowed. The US Federal Reserve has begun to raise interest rates again, to the bewilderment of President Donald Trump. US companies now cite foreign-exchange factors and the prospect of tariffs disrupting their supply chains as threats to their business outlook in a way they have not done for years.

Much of the world has already adjusted to the changing environment. Irish share prices have fallen 14 per cent this year; the FTSE 100 index is down 8 per cent; and German shares have dropped by 12 per cent. China has fallen by a fifth – which is the technical definition of a bear market. If the US is now catching up with the rest of us, it still has a way to go.

A bull market tends to play to the worst instincts of investors, especially the herd instinct. Yet history shows that stock prices end the year lower than they began with surprising regularity – every fourth year, give or take. The last year in which the Dow Jones Industrial Average ended down was 2015, when there was a mini earnings slump. The tech-dominated Nasdaq index has had negative years 10 times since 1975 – most recently in 2011.

The greatest risk of carnage if this bull market is unwinding is the outsized valuations attached to the tech sector. Amazon’s 46 per cent jump this year may or may not be justified. The company is so opaque that it is impossible for anybody except Jeff Bezos, its founder, to know what is really going on. Yet Silicon Valley seems to have a sense of entitlement to its gargantuan worth.

According to the Financial Times, investment bankers have estimated that Uber, which is essentially a very big taxi company, could be worth $100 billion if its planned stock market listing goes ahead in 2019, even though it loses billions of dollars every year. This is the reality – or the unreality – of today’s bull market.