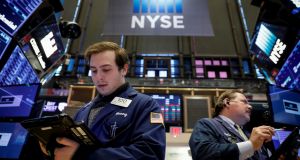 European shares ended lower after a choppy session, failing to benefit from a positive open to trading on Wall Street.

Equity values buckled under the weight of disappointing company earnings as well as data showing the euro zone economy grew less than expected in the third quarter.

The Iseq finished up 0.9 per cent. The Dublin market was buoyed by a 3.55 per cent gain for CRH, the largest component of the index, which closed at €25.69. The building materials group fared well after its US peer Vulcan Materials beat expectations on its third-quarter earnings, highlighting strong pricing and an optimistic outlook.

CRH’s performance more than offset a 1.35 per cent decline for Ryanair, which finished at €12.07 on a day when German airline group Lufthansa released weak results that weighed on the airline sector.

A beneficiary of higher crude costs, BP jumped 2.2 per cent after the oil major’s profits soared to a five-year high, helping the blue-chip index to a 0.1 per cent gain.

Reckitt shares fell 4.5 per cent to a three-month low after the consumer goods maker reported a smaller-than-expected rise in underlying quarterly sales due to a manufacturing disruption at a European baby formula factory.

Shares in Ocado rose 5 per cent after the online grocer agreed on terms of the delivery deal it struck with US supermarket chain Kroger in May.

Aero-defence group BAE Systems fell 2.7 per cent. Traders mentioned deteriorating relations between the UK/Europe and Saudi Arabia, and said more had been expected on defence spending in Monday’s UK budget.

Mid-cap stock Restaurant Group fell 17 per cent after investors did not respond warmly to its acquisition of Wagamama.

The leading euro zone stocks index was down 0.1 per cent, while Germany’s Dax fell 0.4 per cent and France’s Cac 40 ended 0.2 per cent lower.

Lufthansa shares plunged 8.1 per cent after the German airline missed profit estimates for the third quarter and became the latest airline to warn of higher fuel costs hurting profits.

Geberit shares fell 9.3 per cent after the Swiss plumbing supplies provider cut its sales outlook and said it was more cautious about the building industry.

BNP Paribas shares were bottom of the Cac 40, down 2.8 per cent after France’s biggest listed bank reported weaker-than-expected third-quarter revenues, blaming its corporate and investment banking arms and its European retail banks.

Denmark’s Jyske Bank fell 10.8 per cent after its profit missed expectations. However, Volkswagen rose 3 per cent after the German carmaker’s profit beat forecasts, bucking the trend in its sector.

Wall Street stocks were mixed in a volatile session that began well, but technology shares erased gains ahead of Facebook’s quarterly earnings report, which was due after the market closes.

Washington cut off a Chinese semiconductor maker, Fujian Jinhua Integrated Circuit, from its US suppliers amid allegations the firm stole intellectual property from Micron Technology and on concerns the firm could flood the market with cheap chips. Micron rose 1.9 per cent.

Coca-Cola shares climbed 1.8 per cent after beating quarterly sales estimates, while rival PepsiCo dipped 0.1 per cent. However, Pfizer was down 1.3 per cent in early trading after reporting worse-than-expected third-quarter revenue.

Under Armour surged 25.1 per cent after it beat estimates and raised its full-year profit forecast. Rival Nike rose 2.5 per cent.

1 Why gift a son now if it eats into his tax-free inheritance threshold?
2 Can we finally say farewell to the scourge of hot-desking?
3 Irish pharma sector warns of protectionism as US corners supply
4 Mortgage arrears: Prevention is definitely better than cure
5 Limerick-born entrepreneur gets FDA approval for respiratory monitor
6 Chris Johns: Economic self-harm is the root of populism
7 Flights abroad ban could last all summer
8 Irish firm teams up with Salt Edge to simplify mortgage process
9 Government to avoid ‘cliff-edge’ on Covid-19 payment changes
10 Restaurants file court actions against insurers over lockdown losses
Real news has value SUBSCRIBE