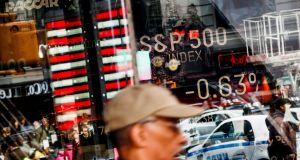 US stocks were lower on Friday afternoon following a slew of high-profile earnings disappointments, but indexes were off the day’s lows at the end and the S&P 500 eased off correction levels.

The downturn in US equities resumed on Friday despite data that showed the US economy was still expanding at a robust 3.5 per cent annualised rate in the third quarter, sending the S&P 500 down by as much as 2.9 per cent and wiping out all of this year’s gains.

Investors have become increasingly concerned that most major central banks will continue to wind down their crisis-era stimulus programmes despite signs economies outside the US are slowing with mounting trade tensions threatening to do further damage.

“It’s a bit of a perfect storm,” said Kristina Hooper, chief global market strategist at Invesco. “The Federal Reserve is normalising monetary policy . . . and we’re beginning to see the tangible negative effects of the trade wars.”

Investor concerns have been exacerbated by the patchy third-quarter results of a handful of bellwether industrial companies this week, such as Caterpillar, and disappointing outlooks from Amazon and Alphabet.

The S&P 500’s lows on Friday made its drop from a September 21st peak to more than 10 per cent – the typical definition of a correction. The index was down 1.4 per cent in afternoon trading, taking its decline in October to 8.4 per cent and putting it on track for its worst monthly performance since February 2009.

A cautious outlook on Thursday night from Amazon for the holiday shopping season sent its shares down 7.3 per cent in afternoon New York trading, its biggest one-day slump in more than two years. Stock in Alphabet, Google’s parent, fell 2.5 per cent. Overall, the Nasdaq Composite was down 1.7 per cent.

After a stunning rally that saw the market value of Amazon and Apple, two of the biggest tech companies, vault past the $1 trillion mark earlier this year, investors have been exiting a tech trade that had widely been seen as one of the most crowded on Wall Street. The Nasdaq, the index that is home to many US technology companies, has lost over 11 per cent in October, leaving it poised for its worst month since November 2008.

Tech stocks had now “begun to underperform, and we think there is more ahead”, strategists at Morgan Stanley noted.

In Dublin, the Iseq finished the day marginally higher after a session that was dominated by the news that AIB chief executive Bernard Byrne was stepping down.