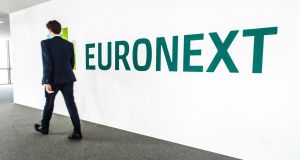 The open of equities trading on Euronext markets in Amsterdam, Brussels, Lisbon and Paris was delayed by roughly 90 minutes

The open of equities trading on Euronext markets in Amsterdam, Brussels, Lisbon and Paris was delayed by roughly 90 minutes. After brief spurts of activity, trading was once again halted before it resumed at roughly 12.20pm CET, according to Refinitiv data.

Last November Euronext NV bought the Irish Stock Exchange, hailing it as a hub for exchange traded funds that is set to benefit as financial activities leave Britain after Brexit. However, Dublin was unaffected by Monday’s outage.

The outages meant that investors were unable to trade on some of continental Europe’s biggest stock markets. The problems on Monday came after a “technical incident” in April prevented Euronext from publishing opening prints for its closely-tracked indices, like the French CAC 40. Trading in cash equities and derivatives were not affected at the time.