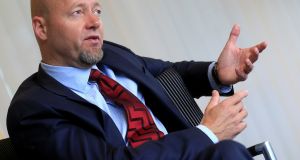 Norwegian sovereign wealth fund CEO Yngve Slyngstad: he is seeking “to have a profitable company by having a board who knows the business”

Norway’s sovereign wealth fund, the world’s largest, will ask the 9,000 companies in which it invests to ensure their board members have sufficient expertise, time and independence, it said in a series of policy papers on Friday.

The $970 billion (€854bn) fund, which funnels Norway’s revenues from oil and gas production, owns 1.4 per cent of all globally-listed shares. It has in recent years become a more active shareholder as it has grown in heft.

While some of the demands put forward on Friday are not new for the fund – such as opposing chief executives who sit as chairs of their companies – others are, such as requiring industry expertise from directors.

“It is really ... industry expertise which is an issue that has been under-communicated from investors,” fund chief executive Yngve Slyngstad told Reuters. “The strong desire to have a profitable company by having a board who knows the business.”

He declined to name specific sectors where he thought board industry expertise was lacking, but said, “there has been a focus on the financial sector, also from regulators, which we will reinforce from our point of view”.

“But this is a broader issue than just the financial sector. We have seen quite differing practice in different sectors and different countries.

“This is a signal that...we will try to look at these issues more quantitatively, to see where we can find the major issues with regards to countries and sectors.”

The position papers will form the basis of the fund’s position for how it votes on the boards of companies.

“It will be a starting point for how we will vote,” chief corporate governance officer Carine Smith Ihenacho told reporters earlier.

Asked whether the fund would divest from reluctant companies on these issues, she said: “It will be a basis for voting, dialogue and engagement.”

The fund said directors should also ensure they have enough time to fulfil their obligations to the boards on which they serve. In practice that means board members of listed companies should not serve on more than five boards at one time, and the chair of a leading company should generally not chair the board of another company.

In the third quarter the fund made a return of 2.1 per cent, helped by rising North American stocks. It still returned 0.2 percentage points less than the benchmark index set by the Norwegian finance ministry.

“The market development was affected by expectations of differing economic growth and uncertainty about the effects of increased trade barriers,” Mr Slyngstad said. – Reuters