HSBC, Volkswagen and US software maker Red Hat among the risers 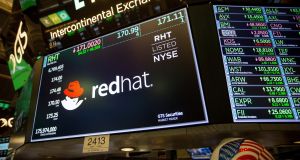 A monitor displays Red Hat signage on the floor of the New York Stock Exchange on Monday. Photograph: Michael Nagle/Bloomberg

European shares climbed after relief spread among investors that Italy dodged a downgrade in its sovereign credit rating. A rally in automotive and banking stocks led the rise in equity values after a rebound from a sell-off which had depressed them to a level not seen since December 2016.

The markets also shrugged off news that German chancellor Angela Merkel would not seek re-election as party chairwoman, as she said she would serve her full term as chancellor until 2021.

The Iseq index rose 1.2 per cent in line with equities across Europe, amid low bank holiday trading volumes. Building materials group CRH, the largest stock on the index, made a gain of 2 per cent to finish at €24.83, while food stocks Kerry and Glanbia rose 0.8 per cent to €91.30 and 3 per cent to €15.33 respectively.

The FTSE 100 climbed 1.25 per cent. Europe’s biggest bank by assets, HSBC, was the largest boost to the blue-chip index, jumping almost 4.8 per cent after it reported a higher than expected 28 per cent rise in quarterly profit.

Just Eat shares fell 1.2 per cent after a critical note from analysts at Peel Hunt, which cut its target price for the stock amid speculation that Uber will take over Deliveroo and create a merged entity that could swallow up Just Eat.

Hammond, who was still delivering his budget as trading closed, said he would be able to use money set aside to help the economy through the shock of a no-deal Brexit.

The chancellor announced plans to impose a duty on online platforms like Google and Facebook, knocking shares in British online retailers Boohoo and ASOS to their lows for the day. Boohoo closed 0.6 per cent lower and ASOS ended up 2.6 per cent.

The Stoxx 600 benchmark index ended 0.9 per cent higher as investors cheered Standard & Poor’s decision to leave Italy’s sovereign rating unchanged. In Germany, the Dax added 1.2 per cent, while the French Cac 40 closed up 0.4 per cent.

Italian banks shone after S&P kept its credit rating two notches above non-investment grade for Italian sovereign bonds, even though it lowered its outlook to negative, saying that the new government’s policy plans were weighing on the country’s growth and debt prospects.

Automotive stocks rose sharply after a report said that China was considering halving its car purchase tax to 5 per cent to support its struggling auto industry. The report lifted shares in carmaker Volkswagen by 4 per cent.

Wall Street opened higher but stocks pared gains as selling in tech giants Netflix and Amazon. com dragged the Nasdaq 100 index lower. Amazon was down about 4.5 per cent around lunchtime in New York, while Netflix was 4 per cent lower. Google-parent Alphabet was also in the doldrums, trading down 2.4 per cent.

Shares of software maker Red Hat gave among the biggest boosts to the benchmark index, surging 42.6 per cent after the company agreed to be bought by IBM for $34 billion. IBM shares fell 2.4 per cent. – Additional reporting: Reuters / Bloomberg