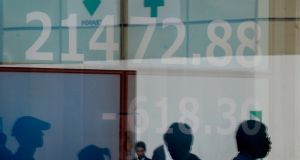 The continued health of corporate profits in both Europe and Asia went some way to assuage investor nervousness. Photograph: Kim Kyung Hoon/Reuters

Global stocks ended a grim October on a brighter note, as corporate earnings on both sides of the Atlantic tempted investors back into a market beset by worries over rising interest rates, trade tensions and a slowing global economy.

The FTSE All-World index recovered about 1.7 per cent on the final trading day of what has been the worst month for equities in more than six years, as investors drew comfort from still-strong corporate profits and went hunting for bargains in beaten-down technology stocks.

In Dublin, the Iseq index lagged many of its European peers, finishing the session up just over 0.7 per cent, held back by heavy hitters including Ryanair and Kingspan which slipped into the red.

Markets have been wracked by a series of concerns this month, ranging from a peak in corporate earnings to the receding tide of global monetary policy stimulus. Those factors have sent FTSE’s global benchmark tumbling 7.2 per cent in October and left a third of the index members nursing at least a 20 per cent decline for the year.

Yet the continued health of corporate profits in both Europe and Asia went some way to assuage investor nervousness, with many major markets on Wednesday enjoying their first consecutive daily advances in more than a month.

“It’s been stomach-churning for everyone,” said Maddi Dessner, a managing director at JPMorgan Asset Management. “But when we look at the fundamentals, we still see strength.”

The Wednesday rebound was particularly strong in technology stocks, which have led the market rally for most of 2018, but have suffered the biggest declines in the abrupt autumn reversal.

Analysts at Barclays said that with about half of US and European companies having reported third-quarter results, a majority had beaten earnings expectations, and “only a small number of companies have cut full-year guidance, which indicates no material cautious turn in business confidence”.

But even after the gains on Wednesday, global stocks are still on track for their worst month since 2012 owing to the slowdown of the previously high-flying US market.

Triggered by a rise in interest rates at the start of the month, October’s sell-off gathered pace as hedge funds exited positions, and earnings from the US industrial bellwethers Caterpillar and 3M showed that weaker growth outside the US was beginning to dent their profits.

Although few investors are declaring that the decade-long US bull market is over, a chastening month has left many cautious.

“We believe the uncertainty around future earnings growth has increased and will likely remain high, reinforcing our call for adding resilience to equity portfolios via exposures to quality companies,” noted Richard Turnill, chief investment strategist at BlackRock, the world’s largest asset manager.

Lilia Peytavin, a strategist at Goldman Sachs, added that European equities had already priced in a “fair amount” of weaker global growth. The Stoxx Europe 600 fell almost 6 per cent in October and, unlike in the US, European equities were unable to recapture the highs for the year set in January.