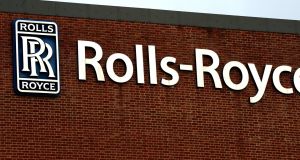 Engineering company Rolls-Royce Holdings tumbled 8.6 per cent in London as it raised £2 billion from a rights issue. Photograph: PA Wire

The S&P 500 and the Dow also slipped as US coronavirus infections increased and investors weighed the timeline of the mass roll-out of an effective vaccine.

The Iseq All-Share index slipped by just under 1 per cent as many of its global heavyweights put in a limp performance.

Irish banks handed back some of their gains of recent days, in line with their European peers. Bank of Ireland finished the session down 4 per cent to close at €2.35 per share. AIB, meanwhile, fell by 1.7 per cent to €1.22.

The banks were also affected by news that there has been a weak take-up of the State-backed credit guarantee scheme for SMEs, suggesting a reluctance by companies to borrow in these uncertain times.

Aviation retail software company Datalex rose by close to 10 per cent to 47.8 cent per share. The Dermot Desmond-backed company is poised to benefit from any upsurge that may arrive in the aviation sector as a result of a coronavirus vaccine.

The FTSE 100 slipped after rallying more than 7 per cent this week as slower-than-expected UK domestic economic growth in September underscored concerns about a faltering recovery from the coronavirus-driven recession.

Engineering company Rolls-Royce Holdings tumbled 8.6 per cent as it raised £2 billion from a rights issue after shareholders signed up for 94 per cent of the new shares and the rest were sold via a rump placing.

Luxury brand Burberry Group reversed course to end 2.3 per cent lower even after its sales returned to growth in October. Insurer Legal & General Group fell 1.9 per cent after it kept its final dividend payment for 2020 flat.

The pan-European Stoxx 600 index was down 0.8 per cent, reversing course after having gained 12.5 per cent so far this month. The banking index led sectoral declines following its best three-day winning streak since the global financial crisis in 2009, while travel stocks fell 0.6 per cent after surging earlier in the week on hopes for an effective Covid-19 vaccine.

Siemens shed 3.3 per cent after the German engineering group gave a cautious outlook on its recovery from the Covid-19 pandemic, saying it expects government and company investments next year to lag the global rebound in economic growth.

Zurich Insurance rose 0.7 per cent as it said its new life insurance business picked up in the third quarter, while Italy’s top insurer Generali lost 0.5 per cent after saying it would not pay the second tranche of a dividend on 2019 results this year.

Heading into afternoon trading, airlines and cruise operators were down. The S&P 1500 airlines index declined 0.5 per cent, while Royal Caribbean Cruises dropped 1 per cent and Carnival tumbled 3.7 per cent.

Amazon, Netflix and Microsoft edged higher, adding to gains from the previous session. These companies, which have logged strong demand during the work-from-home shift, fell sharply earlier this week as investors rotated to value stocks on hopes of a faster economic rebound following positive Covid-19 vaccine data.

Among the biggest boosts to the Nasdaq was a 20 per cent surge in the US-listed shares of Chinese e-commerce company Pinduoduo, after it reported better-than-expected quarterly revenue. Rival JD.com’s shares climbed 7 per cent.

Moderna added 4 per cent after the drugmaker said it had enough data for a first interim analysis of the late-stage trial of its experimental Covid-19 vaccine. It did not say when it plans to release the data.