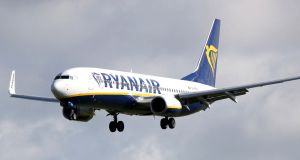 November trading kicked off strongly as positive economic data, including signs of a revival in manufacturing, boosted European markets on Monday.

Investors are also eyeing the US for early signs of an outcome to Tuesday’s elections, particularly Democrat Joe Biden’s challenge to President Donald Trump.

Ryanair Holdings was the main focus of attention after reporting losses of €410.5 million that included exceptional charges tied to fuel hedging and a €197 million after-tax loss.

The Irish airline group closed 4.65 per cent up at €12.275 after hitting highs of €12.61 shortly before 11am. Dealers said that losses were lower than expected, while signs of pent-up demand for travel encouraged investors.

Multinational packaging group Smurfit Kappa advanced 3.84 per cent to €33.56 after analysts singled out the group as one of several likely to benefit from demand for different product lines. The stock hit a high of €33.76 in mid-afternoon before paring back some of those gains in later trading.

Paddy Power and Betfair owner Flutter Entertainment was the big loser among larger stocks, shedding 2.41 per cent to €145.95. Dealers blamed profit-taking on the back of a strong performance on Friday.

Insulation and construction materials specialist Kingspan also benefitted from positive sentiment towards the industry, adding 3.14 per cent to €77.20.

Irish builders’ supplier and owner of Woodie’s DIY chain Grafton Group climbed 1.86 per cent to 685 pence sterling as construction-related stocks proved popular. The Irish business has a large UK business and its stock is listed solely in London.

Ocado led gains on the blue chip FTSE 100 index after raising its full-year earnings outlook. The online supermarket and technology group jumped 8 per cent to 2,459p in its best session in nearly two months. It said it would buy two robotics companies for a total of $287 million (€247m).

Brewer and pub business Marston’s fell 7.6 per cent to 44.66 as investors ditched stocks likely to suffer in a month-long Covid-19 lockdown that begins in England this week. Similarly, Mitchells & Butlers shed 1.66 per cent to close at 154.2p. JD Wetherspoon suffered less, dropping only 0.8 per cent to 855p.

The exporter-heavy German DAX index jumped 2 per cent as a survey showed factories in Europe’s largest economy saw record growth in new orders in October, with numbers improving in other euro zone countries as well.

Morning trading was hit by a tech glitch, with the pan-European Stoxx 600 and Stoxx 50 indices failing to show opening prices due to “input data problems”, index operator Qontigo told its clients.

Among individual stocks, Italy’s biggest payments group Nexi slipped 2.6 per cent after saying that it was in exclusive merger talks with Denmark’s Nets over in a potential $8 billion tie-up.

Also in Italy, cement-maker and CRH rival Buzzi Unicem advanced 5.2 per cent to €19.54.

Wall Street’s major indices gained ground after suffering their worst week since March, as investors geared up for an event-packed week centred around the US presidential election.

5 Be afraid: The era of easy deepfake videos is upon us

7 Nike to end partnership with Amazon.com