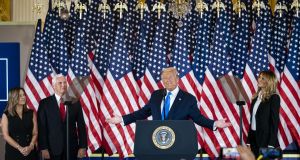 Fading expectations of a decisive presidential election win for Joe Biden have boosted bonds and lifted the dollar as a set of trades based on a “blue wave” Democratic sweep of the White House and Congress stumbled.

Investors had bet in recent days that decisive Democratic victories in line with pre-vote opinion polls would spark another round of stimulus for the pandemic-stricken US economy.

But Donald Trump’s victories in Florida and Ohio undermined investor expectations of a decisive election win for Mr Biden. The Republicans’ strong showing in several battleground states prompted money managers to prepare for the prospect that the outcome would remain unclear for days and the US could be left with a divided government.

“The baseline at this point is far more extended uncertainty,” said Ajay Rajadhyaksha, head of macro research at Barclays in New York.

Scott Minerd, global chief investment officer at Guggenheim Partners, added that the US was likely to be heading for a disputed election result “no matter what happens” on election night.

The yield on the 10-year Treasury briefly eclipsed 0.9 per cent on Tuesday evening, but then dropped as investors rushed into the debt. With results still unclear in many of the big swing states, the yield on the 10-year was down 0.08 percentage points in early Wednesday trading at 0.8 per cent. Yields fall as a bond’s price rises.

US stock futures were volatile. S&P 500 futures were up 0.4 per cent in early European trade on Wednesday, rebounding from the lows hit just hours earlier, as races in battleground states including Arizona and Pennsylvania remained too close to call.

“Futures markets are pricing in a Trump win, which I think is a bit premature,” said David Bailin, chief investment officer at Citi Private Bank.

Futures tracking the Nasdaq 100 index, which is heavily weighted towards the US’s big tech groups, were up 2 per cent, having been briefly halted after a rapid surge at one point on Tuesday night. Some traders had warned of “air-pockets” in the market, predicting sharp moves because many fund managers were sitting on the sidelines.

Investors shifted positions early on Wednesday as chances grew that the race could be decided later this week after a large number of postal ballots in Pennsylvania, Michigan and Wisconsin are counted.

“The market was looking at getting this behind us and getting our stimulus next year,” said David Giroux, chief investment officer for equity and multi-asset at T Rowe Price. “A contested election that we don’t know the answer to, that is pretty negative for the market.”

Investors had positioned themselves in recent days for a strong showing by Mr Biden. They sold 10-year and 30-year Treasuries as part of a wager that trillions of dollars’ worth of stimulus could flood into the economy if Mr Biden won the presidency and his party took control of the Senate. That kind of stimulus has been seen as fuelling growth and inflation, denting the attractiveness of US government debt.

US equity markets have moved dramatically in recent days. A rebound by the S&P 500 on Monday and Tuesday helped investors to recoup some of the losses they tallied over the previous five trading days, which proved to be the worst week for the almost $40 trillion US equity market since the sell-off in March.

Kenmare hotel will not be ‘at your service’ until June, says John Brennan 05:14
For RTÉ, some commitments are simply proving too big 05:13
Stocktake: Is talk of a bubble overstated? 05:10
Stocktake: Markets shrug off Capitol riot 05:00
Does Green Reit buyer have tax-back case? 04:51