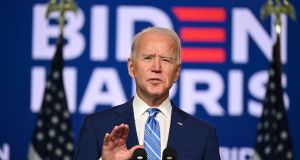 Shares in big US tech groups led Wall Street sharply higher and the dollar weakened as results of the election released so far reshaped investors’ outlook for the path of the American economy and interest rates.

The Nasdaq Composite gained 2.4 per cent in early trading, after the index that is weighted towards the biggest US tech groups rose 3.9 per cent on Wednesday. The S&P 500 climbed 1.9 cent while long-term Treasury prices advanced. Shares in Facebook, which rose more than 8 per cent on Wednesday, added another 3.5 per cent.

The dollar index, which measures the US currency’s performance against six trading partners’ currencies, fell 0.8 per cent.

This marked a continuation of a trend that began when election results began rolling in on Tuesday evening. A stronger-than-expected performance by Donald Trump in the presidential race and fading expectations Joe Biden’s Democrats will turn over the Senate upended Wall Street expectations of a “blue wave” that could have ushered in $2 trillion (€1.8 trillion) of economic stimulus.

Investors viewed this forecast spending spree as a long-awaited catalyst for a repricing of assets across the world, with a rebound in US growth supporting higher inflation and bond yields and a stronger dollar.

“Coming into this election, you had a market that was itching to rotate out of tech and low-yielding government bonds,” said Johanna Kyrklund, chief investment officer of Schroders. “But now it’s looking like more of the same.”

With the presidential race now too tight to call and expectations building for a divided Congress, investors on Thursday were repositioning their portfolios to reflect expectations of slower growth and more stimulus measures from the Federal Reserve.

“You go back to the old playbook of growth stocks that will outperform,” said Jurrien Timmer, director of global macro at Fidelity.

European shares hit a two-week high earlier on Thursday, supported by a handful of strong earnings reports and more stimulus for Britain’s economy, In its fifth day of gains, the European Stoxx 600 index rose 0.6 per cent to hit its highest level since October 20th, with technology stocks once again leading the way. The Iseq was ahead by 0.89 per cent. – Copyright The Financial Times Limited 2020/Reuters