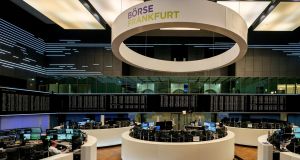 European shares held near eight-month highs on Tuesday, riding a wave of optimism about a Covid-19 vaccine breakthrough, although concerns about the pandemic’s economic damage capped gains.

The pan-European Stoxx 600, which rallied 4 per cent on Monday after positive news from US drugmaker Pfizer about its Covid-19 vaccine candidate, rose 0.9 per cent.

The European Commission said it will approve on Wednesday a contract for the supply of Pfizer and its partner BioNTech’s potential coronavirus vaccine. “European equity markets are consolidating following yesterday’s impressive rally,” Milan Cutkovic, market analyst at Axi, said of European shares, which have surged 12 per cent this month.

While US president-elect Joe Biden is expected to restore a calmer US trade and foreign policy, strict coronavirus lockdowns have threatened a nascent European recovery.

“A large part of Europe is still in a partial or full lockdown, and it is crucial to avoid a back and forth between different levels of restrictions as this is causing significant damage to consumer and business confidence,” Mr Cutkovic said.

The Iseq continued its stellar start to the week in tandem with other markets, increasing by 1.6 per cent to 7,104. Again banks were among the main beneficiaries of the vaccine breakthrough news. Bank of Ireland rose 5 per cent to €2.54,

while AIB was up nearly 9 per cent at €1.23. Bank are sensitive to the broader economic outlook, which has changed with the possibility of a vaccine.

Ryanair, which rose 14 per cent on Monday, confirmed the gain with a more modest 1 per cent rise to close at €15.35, its highest level in several months.

Dalata, the biggest hotel operator in the State, which ended the day up 30 per cent on Monday, was broadly flat.

Building materials group CRH, which has big operations in the US, rose 5 per cent to €33.94 while packaging giant Smurfit Kappa rose 3 per cent to €36.22.

Paddy Power Betfair owner Flutter Entertainment was down again, this time by 3.5 per cent. Elsewhere, Kerry Group ended the day up 5 per cent.

London’s FTSE 100 jumped on Tuesday as prospect of an effective Covid-19 vaccine and optimism about a Brexit trade deal with the European Union electrified the mood, while Premier Foods tumbled after its corporate trading update.

The blue-chip FTSE 100 index closed up 1.8 per cent, gaining 6.5 per cent in two days, its best since March 26, with travel and leisure, energy and aero stocks among the biggest gainers. After rising nearly 1.3 per cent in afternoon trade, the domestically focussed mid-cap FTSE 250 index ended 0.9 per cent higher, with Capita jumping 26.9 per cent after the outsourcer eked out a small rise in adjusted third-quarter core profit helped by cost-cutting.

UK markets had started November on a strong footing, also aided by stimulus measures from the British government and the Bank of England.

Data on Tuesday, however, showed layoffs in Britain hit a record high during the third quarter, while surveys said consumer spending faded in October even as new lockdowns spurred stockpiling.

Croda International jumped 7 per cent after the speciality chemicals maker struck a additives supply deal with Pfizer for manufacturing its Covid-19 vaccine candidate.

Premier Foods shed 10 per cent even after it lifted its full-year trading profit outlook, while motor insurer Direct Line Group fell 2.2 per cent on lower quarterly premiums because of weak car sales due to the pandemic.

The ZEW economic research institute said German investor sentiment fell more than expected in November on concerns over a second lockdown. Italy’s bourse added 0.4 per cent a day after posting its best day since March. The country is ramping up business restrictions in Tuscany and four other regions to rein in the second wave of the pandemic.

Banking, car parts and energy stocks were among Europe’s biggest gainers, while travel and leisure stocks fell on lockdown concerns. “Even if a vaccine proves effective, inoculating a large enough part of the population will take time and leave these segments prone to economic lockdown fallout,” Commerzbank analyst Christoph Rieger said.

In Amsterdam, shopping mall owner Unibail-Rodamco-Westfield shares surged 21 per cent to the top of the Stoxx 600 after its shareholders voted against a planned €3.5 billion rights issue.

The S&P 500 and the Nasdaq dropped on Tuesday as excitement over signs of a first successful late-stage Covid-19 vaccine trial faded, while investors continued to pull money out of some big tech companies that have benefited most from the pandemic.

Amazon, Facebook and Microsoft, which have flourished from this year’s work-from-home shift and powered Wall Street to new heights, extended Monday’s losses and pulled the tech-heavy Nasdaq down about 1.3 per cent.

The tech, communication services and consumer discretionary indexes dropped sharply as investors moved to sectors expected to benefit from a full reopening of the economy, such as energy, industrials and materials.

Apple edged higher ahead of an event later in the day where it is expected to unveil new Mac computers using its own in-house processor chips.