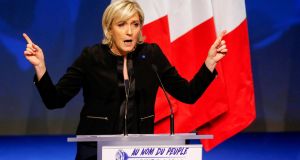 Investors also awaited a speech by Federal Reserve chairwoman Janet Yellen, which came after the close of European markets, following hawkish comments by her colleagues earlier this week that boosted bets for a March rate hike.

Banks have been the biggest beneficiaries of that speculation and were so again on Friday.

The Iseq index closed flat in the final session of the week, as its two biggest stocks had contrasting fortunes. Ryanair lost 0.2 per cent, closing at €14.29, having earlier fallen as low as €14.22, despite reporting strong February traffic numbers, including passenger growth of 10 per cent.

However, building materials group CRH climbed almost 1 per cent to €33.44, while Bank of Ireland rose 1.3 per cent to 23 cent on a good day for financial stocks across Europe.

This helped offset drops for a number of other stocks, including Paddy Power Betfair, which lost 2.4 per cent to finish at €101.45. Insulation maker Kingspan fell 1.1 per cent to €29.27, while food group Glanbia declined 1.4 per cent to €18.21. Paper and packaging company Smurfit Kappa also finished down, closing 0.3 per cent lower at €25.18.

Dalata Hotels Group fell 1.25 per cent to €4.43. Analysts at Davy Research have updated their earnings estimates for the stock following its full-year results, highlighting expansion opportunities.

The FTSE 100 nudged down slightly, as mining stocks and a disappointing earnings update from WPP weighed on the index of blue-chip companies.

WPP, the world’s largest advertising group, saw its shares drop 8 per cent after the group, led by chief executive Martin Sorrell, expressed concerns about the outlook for 2017, cutting its sales forecasts on the back of a bleak economic environment. Its weak projections dragged media shares to the worst performance in the Stoxx 600.

Workwear and hygiene company Berendsen slumped 14.9 per cent, after its financial results and outlook statement. The company said the first half would continue to be impacted by legacy operations in the UK.

London Stock Exchange Group shares also declined after it reported a fall in profits from £357.1 million to £192.9 million for 2016, having been stung by costs associated with its shaky merger with Deutsche Börse.

The Stoxx Europe 600 Index dropped 0.1 per cent at the close, after earlier sliding as much as 0.5 per cent. In Germany, the Dax dropped 0.3 per cent, but France’s CAC 40 index went against the broader European trend, climbing 0.6 per cent to close at its highest level since August 2015, as banks advanced.

BNP Paribas, Société Générale and Crédit Agricole all extended their gains after a poll suggested a victory for Le Pen in the French presidential election was less likely.

The rally in banking stocks came as the gap between French and German 10-year government bond yields fell to its lowest in a month.

Gemalto shares rose 6 per cent, after the Dutch digital security company said its profits from operations rose 7 per cent in 2016.

Wall Street stocks fluctuated ahead of Ms Yellen’s speech, with some investors sitting out the first part of the session as they waited for a steer from the Federal Reserve chair on the chances of an interest rate hike this month.

Costco was the top drag on the S&P and the Nasdaq in early trading, falling 4 per cent after its quarterly sales and profit missed analysts’ expectations. Snap, the company behind Snapchat, jumped 19 per cent – a day after its much-awaited debut – after media company NBCUniversal said it had invested $500 million.

10 Think that working from home is here to stay? Think again