Markets less tied to moderate win than in US and Brexit votes, says Marcel Zimmerman 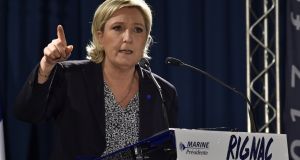 Financial markets are more prepared for the chance of right-wing French presidential candidate Marine Le Pen securing the keys to the Élysée Palace than the outcomes of the Brexit vote and US election, according to a senior Swiss central banker.

“Given lessons learned from the two major surprises last year of Brexit and the US presidential election, where outcomes were different from expectation, probably markets are less aligned to what is still the base-case outcome – that in the French election that a moderate candidate wins,” Marcel Zimmerman, head of money markets and foreign exchange at the Swiss National Bank (SNB), said in an interview with The Irish Times.

As a measure of nervousness ahead of the French election – with first-round voting taking place on April 23rd – the country’s borrowing costs widened sharply last month against those of Germany. The market interest rate, or yield, on France’s 10-year bonds widened to almost 0.8 percentage points above the German equivalent on February 21st from below 0.28 points four months earlier.

Mr Zimmerman made the comments ahead of his planned appearance at the ACI Financial Markets Association World Congress in Dublin in May, where speakers will include Federal Reserve Bank of Chicago president Charles Lee Evans, Central Bank governor Philip Lane, and the chief executives of AIB and Bank of Ireland, Bernard Byrne and Richie Boucher.

Mr Zimmerman will be speaking about crisis resolution. He is likely to address his involvement in the SNB setting up of a Swiss “bad bank”, called StabFund, in 2008 to take over $38.7 billion (€36.4 billion) of toxic assets of commercial bank UBS after the collapse of Lehman Brothers. In late 2013, UBS bought back the remaining assets held in StabFund, delivering a $3.76 billion profit for the SNB.

While the SNB looked at the Irish National Asset Management Agency when it was being set up in 2009 as authorities internationally sought to deal with the financial crisis, Mr Zimmerman said his officials had “more intensive contact with German and Belgian bad-bank structures”. Nama concentrated on commercial real-estate assets, while the Swiss, German and Belgian bad banks were involved in the working out of more esoteric financial investments.