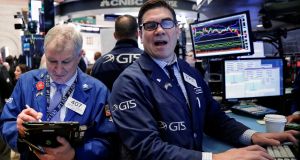 Traders on the floor of the New York Stock Exchange on Monday. Photograph: Reuters/Brendan McDermid

European shares rose on Monday, with gains across bourses and industry sectors, as the focus gradually shifts from the earnings season to monetary policy and politics with Italy’s election on Sunday.

Shares gave up some of their gains after comments by European Central Bank president Mario Draghi suggested the bank was still confident that inflation was on an upward trend, supporting market expectations for the bank to finally end its bond-purchase programme this year. The pan-European STOXX benchmark index closed up 0.6 per cent at 383.34 points.

Bank of Ireland was down 3.3 per cent at €7.54 after the lender said it would resume dividend payments for the first time since the financial crisis and reported underlying profits steady at €1.1 billion. The sell-off appears to have been triggered by the bank’s lower-than-expected forecast for net interest margin – a key measure of profitability.

Ryanair traded up 0.2 per cent at €16.22, ahead of rivals in the sector, while drinks firm C&C closed 2 per cent up at €2.94 despite mounting speculation over its struggling US operation.

Kilkenny-based Glanbia had a good session following last week’s results, trading up 1.6 per cent at €14.65. The three Iseq-listed property Reits – Hibernia, Ires and Green – all ended up.

Britain’s top share index rallied, shaking off last week’s slight decline as firmer commodities stocks and a rise in Associated British Foods propped up the FTSE. The blue chip FTSE 100 index was up 0.7 per cent at 7,267 points, while mid-caps gained 0.2 per cent.

While individual moves on the FTSE were muted, mining stocks led the gainers, with shares in Anglo American, precious metals miner Randgold Resource and silver miner Fresnillo rising between 1.7 per cent to 2.1 per cent as underlying metals prices gained.

Shares in Associated British Foods were also among top gainers, up 2 per cent, after the Primark owner gave an update which forecast total first half sales at Primark to be up around 7 per cent at constant currency rates, though it was held back by a reduction in sugar revenues.

Shares in Standard Life Aberdeen were the biggest fallers, however, down 1.5 per cent as analysts continued to ponder the implications of the sale of SLA’s insurance unit to Phoenix.

Among the main climbers were satellite firm SES, up 9.4 per cent, German drugs packaging firm Gerresheimer, up 2.4 per cent, and France’s pipe-maker Vallourec up 4.5 percent.

Deutsche Bank closed flat after it said it would float its asset management arm DWS on the Frankfurt stock exchange, as it fights to regain investor trust afters years of scandals and restructuring.

Lloyd’s of London underwriter Hiscox saw a 4.7 per cent fall after it reported a fall of more than 90 per cent in full-year pretax profit as it faced the costliest year ever for insurers and reinsurers due to natural disasters.

The Fed said on Friday it expected economic growth to remain steady, and saw no serious risks on the horizon that might pause its planned pace of rate hikes.

This week is heavy on data, with a report on personal consumption expenditure, the Fed’s favourite gauge of inflation, expected on Thursday.

All 11 major S&P sectors were higher, led by a 0.81 per cent gain in the technology index. Apple, Amazon, Facebook and Alphabet were up between 0.99 per cent and 1.2 per cent.

Berkshire Hathaway rose 1.8 per cent after Buffett said his conglomerate, which is sitting on $116 billion of cash, was “more inclined” to repurchase stock than pay dividends as a means to use excess cash.

Qualcomm shares rose 1.6 per cent after the chip-maker urged Broadcom to enter into price negotiations on its $117 billion offer for the company. – Additional reporting by Reuters/Bloomberg

Conor McGregor ’s management firm returns to profit in 2019 17:34
Hallahan to step down as managing director of Microsoft Ireland 17:32
Numbers paying tax at top rate to fall by 10% in 2021 17:09
Constitutionality of workplace dispute process challenged 16:43
An Post reduces gender pay gap to 1.4% while improving female representation 16:06