Sterling slips to five week low ahead of Johnson speech

‘Last time he gave a major speech, sterling sold off by 0.8 per cent,’ said an analyst 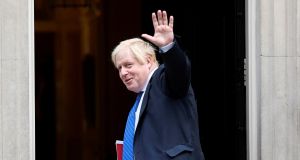 Boris Johnson will say that leaving the EU ‘is not grounds for fear but hope’ in his speech.

Sterling slipped to a five-week low against the euro on Wednesday, as investors turned cautious ahead of a speech on Brexit by Boris Johnson, Britain’s foreign minister and prominent supporter of the campaign to leave the European Union.

Mr Johnson will say that leaving the EU “is not grounds for fear but hope” in the first of several speeches by government ministers Prime Minister Theresa May hopes will set out a “road to Brexit”.

The speech in London is being billed by aides as a chance for Johnson, who is credited with persuading many Britons to vote to leave the bloc, to show a path for “an outward-facing, liberal, and global Britain following our exit from the EU”.

But some investors are worried that Johnson’s pro-Brexit stance make him a risk for sterling.

“The risk is that he comes out and muddies the situation a bit more, and maybe markets reduce the odds that they’re placing right now on a transitional deal. That’s the key tail-risk from his speech.”

Sterling slid against the dollar and the euro on Friday after the European Union’s Brexit negotiator Michel Barnier warned Britain that a post-Brexit transition deal was “not a given”.

Sterling slipped 0.3 per cent against the euro to 89.20 pence, its weakest since January 12th.

It also edged down 0.1 per cent on the day to $1.3869 against a dollar that was weaker against most other currencies.

Some investors wagered that Johnson’s speech would be sterling-positive.

“We expect the speech to overshadow any other Brexit development today and its content to create a positive sentiment which could support the pound,” said IronFX analyst Peter Iosif in a note to clients.

Sterling had strengthened on Tuesday after data showed British inflation unexpectedly stayed close to its highest levels in six years in January, firming up investors’ bets that the Bank of England will raise interest rates again in May.

The BoE surprised financial markets last week by indicating that rates could move up faster than previously expected, as the bank wanted to bring inflation back to its target of two per cent within two years rather than three.

In a Reuters poll taken after the BoE’s policy meeting last week, 32 of 57 economists said the Bank would raise its key rate to 0.75 per cent in May, when it publishes its next quarterly Inflation Report.

In a January poll, only 13 of 71 economists had a rate hike in their forecasts for next quarter.

Wages numbers due next week will be closely eyed. -Reuters