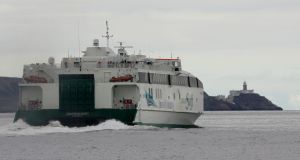 Shares in Irish Continental Group (ICG) fell on Monday after analysts at Davy downgraded their view on the ferry operator’s stock on valuation grounds.

“Irish Continental Group remains one of the best-managed transport companies in Europe, with an enviable track record of best-in-class operating efficiency and excellent capital allocations,” said Davy analysts Stephen Furlong and Eoghan Reid in a note to clients.

However, they said that as the valuation gap between ICG and its peers have narrowed over the past two years, the stock is “fairly valued”, prompting them to lower their rating on the stock to “neutral” from “outperform”, which was the equivalent of a “buy”.

Shares in ICG fell as much as 1.4 per cent in early trading on Monday to €5.72, valuing the group at almost €1.1 billion. The Davy analysts have a €6 price target on the stock.

ICG is investing more than €300 million in two ferries being built. The first of these, a 434-cabin cruise ferry that’s due to be delivered in the middle of this year, will serve Ireland to France routes. The second, which will be capable of carrying 1,800 passengers and 330 freight containers, will be delivered in mid-2020 and serve ICG’s Dublin-Holyhead route.

The Davy analysts said they expect ICG’s earnings to “ramp up” in the coming years as a result of the new ferries.