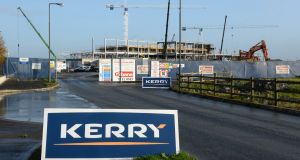 Kerry Group fell 4.6% to €81.80 on the Irish market as investors had anticipated the group would outperform more than it did. Photograph: Dara MacDonaill

The Iseq overall index advanced 0.23 per cent on Tuesday as results both helped and hindered stocks on the index. Both Kerry Group and Green Reit issued results, with the latter advancing as shares in Kerry Group declined.

In Britain a disappointing update from banking heavyweight HSBC and declines in big mining stocks on metal price weakness weighed on the country’s top share index, while in the United States a steep fall in Walmart’s shares put the skids on the S&P 500 and the Dow’s six-day winning streak.

Despite a relatively upbeat set of results, Kerry Group fell 4.6 per cent to €81.80 on the Irish market as investors had anticipated the group would outperform more than it did. Another food group Glanbia, which reports Wednesday, also dropped, albeit by only 0.61 per cent to €14.62.

Following its results showing an increase in the value of its portfolio of properties by 5 per cent to €1.45 billion in the six months to December 31st, Green Reit moved up 2.22 per cent to €1.568 on the day. Other Reits on the Iseq, Ires and Hibernia, also ended the day in positive territory.

News surrounding Fianna Fáil’s plan to introduce a Bill to regulate so-called vulture funds had a negative impact on financial stocks. Bank of Ireland fared better than rivals – off by just 0.06 per cent to €7.77. Permanent TSB fell 4.6 per cent to €2.07, although this is the most illiquid of the banking stocks. AIB dropped 1.57 per cent to €5.335.

The big winner of the day was agri-services group Origin Enterprises, which rose by 20 cent or 3.67 per cent, to €5.65 on relatively healthy volume.

HSBC fell 3 per cent after Europe’s biggest lender by market value reported a jump in annual pre-tax profit that missed expectations and unveiled a plan to raise up to $7 billion over the next four months to bolster its capital base.

InterContinental Hotels Group was another big faller on the FTSE, down 2.7 per cent. The operator of Crowne Plaza and Holiday Inn hotels said it would not pay out any additional capital to investors in 2018 as it announced a better-than-expected profit and a new strategy to speed growth.

Reckitt Benckiser fell for a second day as brokers cut their price targets on the stock after a disappointing update and a vague outlook on Monday that sent its shares down more than 6 per cent to a one-year low.

Top gainers on the FTSE were shares in Evraz, up 5 per cent.

European shares edged back to positive territory after ending a three-day recovery in the previous session when Wall Street and Chinese markets were closed for holiday.

Shares in Edenred were one of the top performers on the Stoxx, up 6.49 per cent, after the French prepaid meal voucher and card provider reported record 2017 earnings, increased its dividend and expressed confidence over 2018.

The world’s biggest brick-and-mortar retailer Walmart reported a lower-than-expected profit and posted a sharp drop in online sales growth during the holiday period. Its shares fell 10 per cent, putting them on track to record their worst day in more than two years. Other retailers, including Target, Kroger and Costco Wholesale, also fell.