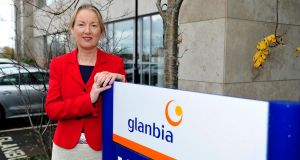 Siobhán Talbot, group managing director of Glanbia. The group has reined in its earnings expectations for the coming year. Photograph: Bloomberg

Food and dairy group Glanbia tumbled 7.46 per cent to €13.53 despite reporting a 55 per cent increase in profits to €329.4 million for 2017. The Kilkenny-based business reined in earning expectations for the coming year in the face of falling milk prices and planned investments.

Home lender, Permanent TSB, the focus of a row over plans to sell mortgages in arrears to vulture funds, fell almost 1 per cent to €2.05. Traders noted that the number of shares traded was low.

Packaging group Smurfit Kappa, which has performed strongly since publishing results earlier this month, dipped 0.74 per cent to €29.54.

Motor insurer and emergency repair specialist AA crashed more than 28 per cent to close at 83.58 pence sterling after the company cut dividends and reported poorer than expected profits.

AA is investing in new products that will warn motorists of problems before they occur, but said that it will limit dividend payments until it has the free cash flow to justify them.

The FTSE outperformed its European peers with a 0.48 per cent rise. Heavyweight Glencore rose 5.2 per cent to 404.5p following a set of full-year results described as the miner’s “strongest on record”.

It unveiled a hefty jump in its annual dividend to 20 US cents, up from seven cents last year. The London-listed group saw pretax profits soar to $6.9 billion for 2017 compared to a $549 million loss the year before. That helped the basic resources index rise 1.6 per cent.

Lloyds was also in the ascendancy, rising close to 3 per cent or 1.9p to 69.7p, after delivering a £3.2 billion bumper pay out to investors and reporting a record annual profits haul.

The pan-European Stoxx 600 index closed up 0.16 per cent at 381.1 points but some bourses on the continent ended the day slightly in the red, such as Germany’s DAX, down 0.14 percent.

French technology consultancy group Atos disappointed analysts with its forecast for modest profit growth and ended the day down 5.4 per cent.

Around halfway through earnings season, more than half of MSCI Europe firms have either met or beaten analysts’ earnings expectations, according to Thomson Reuters data, with the bulk of beats concentrated in tech stocks and the energy sector.

Gains in technology shares powered Wall Street’s main indices ahead of minutes of the Federal Reserve’s most recent policy meeting.

The Fed left rates unchanged at the January meeting, but investors will look for its opinion on inflation and interest rates after strong economic data raised concerns of overheating, triggering the recent selloff.

Facebook, Apple, Amazon, Netflix and Alphabet powered the S&P and the Nasdaq.

Qualcomm fell 1.05 percent after Broadcom lowered its takeover offer for the chipmaker. The revised offer comes in the wake of Qualcomm’s sweetened bid for NXP Semiconductors.

The CBOE Volatility index, a gauge of near-term stock market volatility, eased to a session low of 17.97 and below Friday’s close of 19.46.