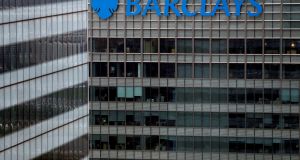 Barclays shares closed up more than 4 per cent as investors reacted positively to results. Photograph: Reuters

The Iseq overall fell 0.14 per cent on Thursday, but still managed to outperform wider European indices.

Britain’s top share index fell to a one-week low on the back of disappointing results, big stocks going ex-dividend and concerns over rising bond yields.

Across Europe, it was a similar picture, with a flurry of corporate results failing to impress amid a wave of speculation around faster interest rate hikes in the US.

US stocks, meanwhile, reversed a two-day fall on Thursday helped by gains in technology and industrial shares.

A relatively busy day on the Irish stock market on Thursday saw Glanbia claw back some ground after Wednesday’s fall following results which caused some market disappointment. The company closed up 3.84 per cent on Thursday at €14.05.

Continuing political and media talk surrounding regulation of vulture funds spelled bad news for Permanent TSB on the day, which fell 2.44 per cent to €2. There were marginal moves for the bigger Irish banks, with Bank of Ireland ending in the Green and AIB down by 0.19 per cent to €5.335.

A positive set of results from Ires Reit wasn’t sufficient to push up the share price and it fell almost 1 per cent to €1.416. Green Reit, which had performed well earlier in the week, also fell, declining by 1.79 per cent to €1.53.

Finally, in the run up to reporting of its results on Friday, Kingspan lost some ground and closed down on the day by just shy of half a per cent at €37.40.

Miner Anglo American edged up 0.2 per cent following its full year update. The miner, whose shares have gained 16 per cent in 2018 ahead of the announcement, reported a 45 per cent increase in annual earnings and halved its net debt.

Elsewhere mid cap Moneysupermarket. com plummeted 13.7 per cent after its guidance disappointed investors, with the firm pointing to costs around a new strategy.

Banking stock Barclays jumped more than 4 per cent after reporting its annual results.

The pan-European Stoxx 600 index ended down 0.2 per cent, having fallen as much as 1 per cent earlier in the session.

French insurer Axa posted higher than expected 2017 net profit and Belgian financial services provider KBC was boosted by solid performances in the Czech Republic and its international business. Their shares rose 0.6 per cent and 2.3 per cent respectively.

Denmark’s Genmab, Europe’s biggest biotechnology company, posted the best performance within the Stoxx 600, surging as much as 19 per cent as it reassured investors on sales growth of blood cancer drug Darzalex this year.

United Technologies rose after its chief executive said the company was exploring a breakup of its business portfolio.

Both the Dow and S&P benefited from gains in Amazon, Apple, Microsoft and Facebook. All the 11 major S&P sectors were higher, led by a more than 2 per cent rise in the energy index.

Chesapeake Energy was the top gainer on the index, jumping 19 per cent, after the company reported upbeat quarterly profit.