Britain’s FTSE 100 index closed down 0.11 per cent as a number of earnings-driven falls weighed on the blue chips 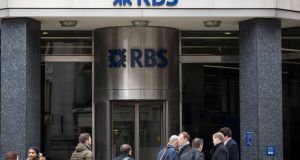 Britain’s blue chip FTSE 100 index closed down 0.11 per cent . A number of big, earnings-driven falls weighed on the blue chips

US stocks rose with treasuries and the US dollar slipped as investors await clues on US Federal Reserve policy under its new chairman Jerome Powell.

Kingspan was among the biggest movcers on the day. The insulation group was down by more than 6 per cent at one point in the morning, after it signalled Brexit-related potential softness in its UK division.

Cairn Homes fell by 3.1 per cent to €1.73, after news emerged it has sold on a prime Dublin residential site.

Independent News and Media was among gainers, up almost 2 per cent to 10.7 cents, ahead of its EGM next week.

A number of big, earnings-driven falls weighed on the blue chips, down 4.8 per cent and on track for their biggest one-day drop in nearly one year after the bank reported its full year results. Analysts flagged higher-than-expected restructuring costs.

Aer Lingus and BA owner IAG was another big faller, down 5.7 per cent after it reported annual figures. Analysts said that while IAG’s results were in line with their forecasts, revenue was light and fuel costs were worse than expecte

Pearson’s update was well-received by investors, with shares in the educational publisher rising 0.7 per cent. Pearson has been grappling with the switch to digital from paper textbooks, issuing a series of profit warnings.

BT’s shares were the top performers with the telco rising 5 per cent after UK regulator Ofcom unveiled new rules on the roll-out of full-fibre broadband, saying that it would not regulate the prices of BT’s Openreach superfast broadband products.

French auto parts maker Valeo slumped 11 per cent to a six-month low, making it the biggest faller on the STOXX 600. Its second-half profit fell on adverse exchange rates and raw materials prices.

In the energy sector, Finnish group Neste hit a record high following an upgrade from Barclays. It ended the day up 3.5 percent.

The telecoms sector, which has been underperforming the broader market in the past few years, was also boosted by gains in Telecom Italia, up 2.1 per cent on heavy newsflow about possible dealmaking.

Three sources told Reuters that the Italian former phone monopoly had chosen Goldman Sachs and Credit Suisse to work on a spin-off of its fixed-line network.

While the Dow and the S&P were still on track to post small losses for the week, the Nasdaq was set for its second straight week of gains.

Hewlett Packard Enterprise and HP were among the biggest gainers on the S&P 500, rising 9.8 per cent and 5.2 per cent, respectively. The two companies created from the split of Hewlett Packard in 2015, reported strong results and HPE also announced a plan to return $7 billion to shareholders.

The S&P technology index rose 1.3 per cent, with chipmakers among the major gainers. Intel was up 3.5 per cent and Micron gained nearly 5 per cent.

Blue Buffalo Pet Products jumped 17 per cent after General Mills said it would buy the natural pet food maker for $8 billion. General Mills was the biggest loser on S&P 500, falling about 3.7 per cent.