‘The right answer with stuff that bad is to step on it hard,’ billionaire investor (94) says 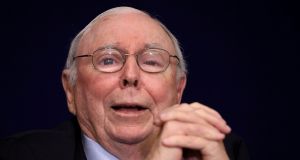 Charlie Munger addressing the Daily Journal annual meeting: “I’m about to die and you aren’t. You don’t want to trade your position for mine.” Photograph: Reuters

There cannot be many nonagenarians who spend their time worrying about cryptocurrencies.

But Charlie Munger, the 94-year-old billionaire investor, is convinced that bitcoin is “noxious poison”.

“I regard the bitcoin craze as totally asinine,” he told a packed hotel ballroom in downtown Los Angeles, where hundreds of what he called “groupies” gathered for what some feared may be one of their final chances to question Warren Buffett’s long-trusted deputy.

Over the course of two hours at the annual meeting of his company the Daily Journal, Mr Munger sat back in his chair to field questions about oil and climate change, airlines and electric cars, how to make money and how to live a successful life.

It was a miniature version of the annual meeting of Berkshire Hathaway, where Mr Munger is vice-chairman. But whereas at Berkshire, Mr Munger acts as the laconic sidekick to Mr Buffett, here he had the floor to himself.

And he was not short on criticism of aspects of the modern world.

“It’s amazing what people have come to believe,” he said, when asked about the “cognitive biases” affecting the world today, with only different kinds of “idiot” to choose from on different television channels.

And continuing on the bitcoin topic, he said: “I expect the world to do silly things from time to time, because everybody wants easy money. It’s just disgusting that people are taken in by something like this . . . Our government’s lax approach to it is wrong. The right answer with stuff that bad is to step on it hard.”

Despite his strong line against cryptocurrency, he also admitted that he had no idea whether internet companies such as Google and Alibaba were overvalued and was non-committal on the impact of artificial intelligence.

“I’ve done so well in life by using organised common sense that I never wanted to get into fields like AI,” he said.

Asked about Berkshire Hathaway’s recent partnership with Amazon and JPMorgan Chase to explore providing healthcare services for their employees outside of the traditional insurance system, Mr Munger called the US healthcare system “evil”. A dying American is like a rotting carcass on an African plain, he said, as profiteers circle like hyenas.

Elsewhere, Mr Munger did not hesitate to address his own advancing years. Most investors will have a much harder time than he and Mr Buffett did in making money from stocks, he said, “but I’m about to die and you aren’t. You don’t want to trade your position for mine.”

Mr Buffett recently elevated two other lieutenants to serve alongside Mr Munger as Berkshire vice-chairman, highlighting how their nearly 60-year association is likely moving into its final phase.

The 2017 annual report for the Daily Journal, which is trying to shift its business from newspapers to legal software, insisted it is “not a smaller version of Berkshire Hathaway”. But that did not stop two attendees from addressing Mr Munger as “Mr Buffett”. “I’m flattered to be called Mr Buffett,” he responded calmly.

As the Daily Journal annual meeting has attracted a bigger crowd, some long-time attendees missed the more nuanced discussion of years ago.

“It was more intimate and interesting in the early days,” said Horst Brockmueller, an investor visiting from London who still came because “it could be one of his last live appearances”.

Some just wanted to hear Mr Munger endorse their own views – something he indulged only so far. “You’re right, but you already knew that,” he told one questioner. “That wasn’t really a question.” – Copyright The Financial Times Limited 2018